Analysis of "Vulture" by Robinson Jeffers 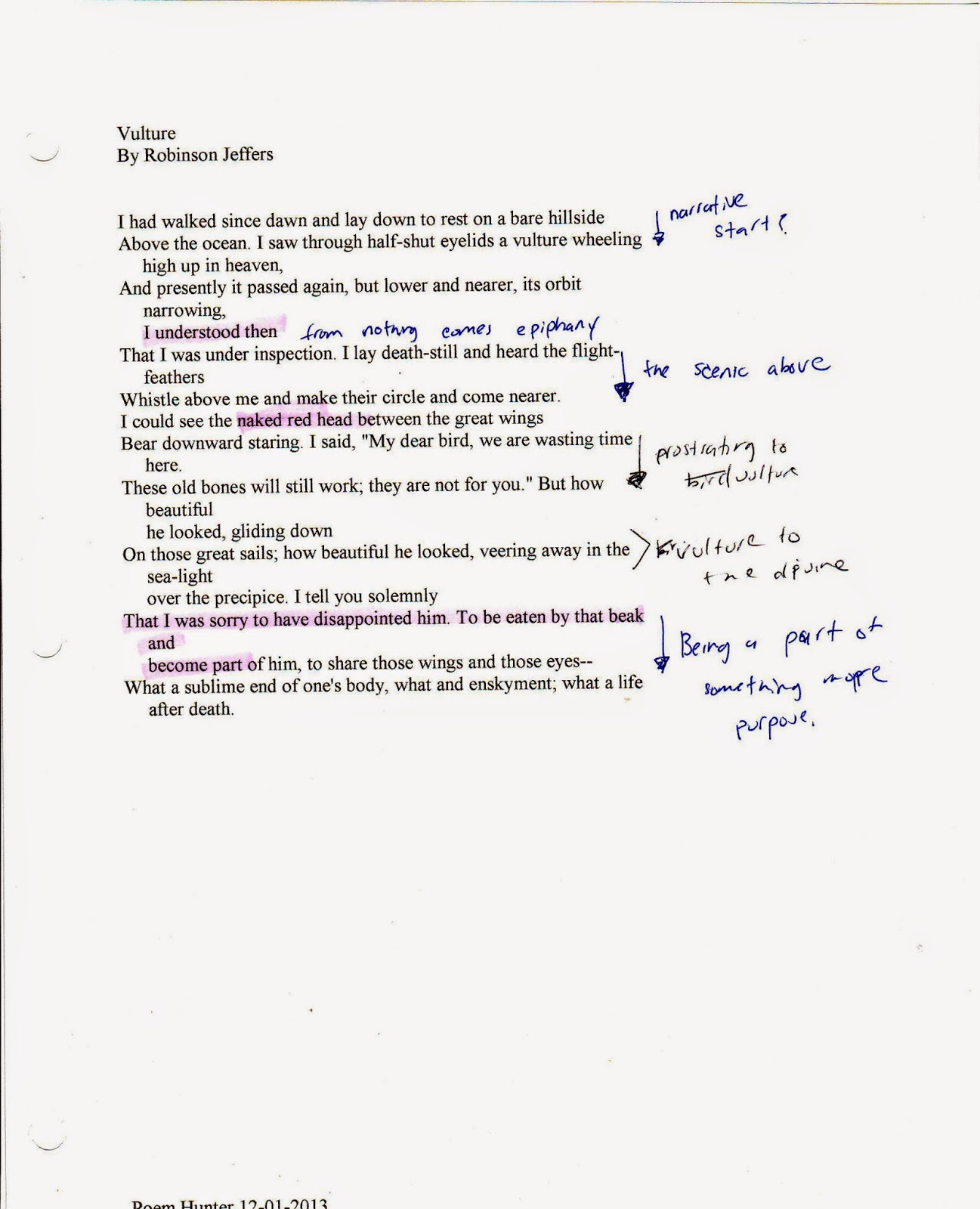 "From nothing comes epiphany"  And I think this explains the poems core -- that the majority is in the guise of nature, but it is the speaker trying to place himself in nature but not fitting in quite as well.

Jeffers is known for his long lines, so I'm not too sure how to quote them.  But the poem starts out with setting first, "I had walked since dawn and lay down to rest on a bare hillside / Above the ocean."  Simple enough, right?  The speaker is traveling and ends up looking up.  And as the speaker is about to sleep or awaken, "I saw through half-shut eyelids" a vulture appears above him like a skylark, but rather than fly upward like the skylark, the vulture, "lower and nearer, it's orbit / narrowing.'

Then comes the epiphany, "I understood then".  Such a short line in a Jeffers' poem over-implicates the poems core, but the poem is not the epiphany, it is how the epiphany is used.

"That I was under inspection.  I lay death-still and heard the flight-feathers / Whistle above me and make their circle and come nearer."  The speaker appears to be near death from the inspection of the vulture, but note there's no tonal shifts towards a positive or negative rather a curiosity to figure out what the vulture sees.  And yes, the circling and coming nearer, feels like a reference to the skylark, "Higher still and higher / From the earth thou springest / Like a cloud of fire;"  Where the skylark feels like a distant harbinger, the vulture is a more earthly figure.

"I could see  the naked read head between the great wings" this seems like a foreboding image, but this is juxtaposed with, the speaker's insight "Bear downward staring, I said, 'My dear bird, we are wasting time here / These old bones will still work, they are not for you.'"  A tinge of humor.  Yes, the vulture is looking the speaker as something that is dead, but is really alive.  The key here is who is he speaking to.  The easy answer is to the vulture, but isn't the speaker himself trying to convince himself that he is alive?  This is more of a monologue than an exchange due to the speaker's conceit of the epiphany -- this is what he "understood."

The speaker refers to the vulture as beautiful as the vulture shifts between observation and metaphor, "On those great sails, how beautiful he looked, veering away in the sea-light."  The vulture takes on beauty and two metaphors of sea and land -- the vulture consumes the scenery.

"I tell you solemnly / That I was sorry to have disappointed him.  To be eaten by that beak and become part of him."  Just as the scenery is consumed by the vulture, the idea behind the vulture starts to consume the speaker -- first the visual, and then the metaphor, "share those wings and those eyes -- / What a sublime end of one's body, what and enskyment, what a life / after death"

To be a part of something.  Note at the beginning of the poem, the speaker was alone on a walk and was at his limit and could see further places to travel when the vulture consumed him.  Yes, this reminds me of Prometheus and how, for punishment giving man fire, his liver was eaten by an eagle.  I'm not too sure if this plays a role in this poem since the vulture serves more as a natural Charon than an vengeful eagle.

Posted by Retailmfa at 6:19 AM