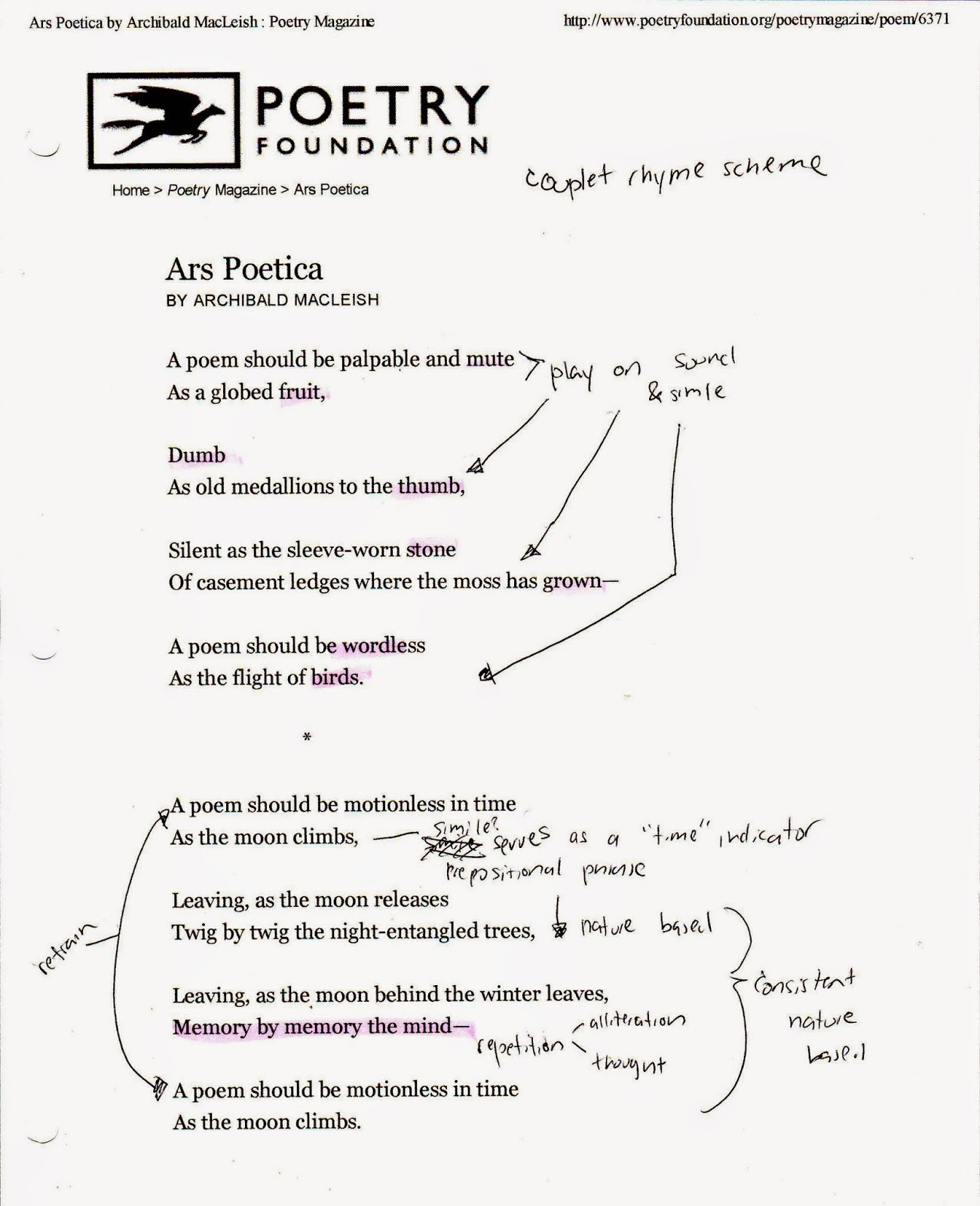 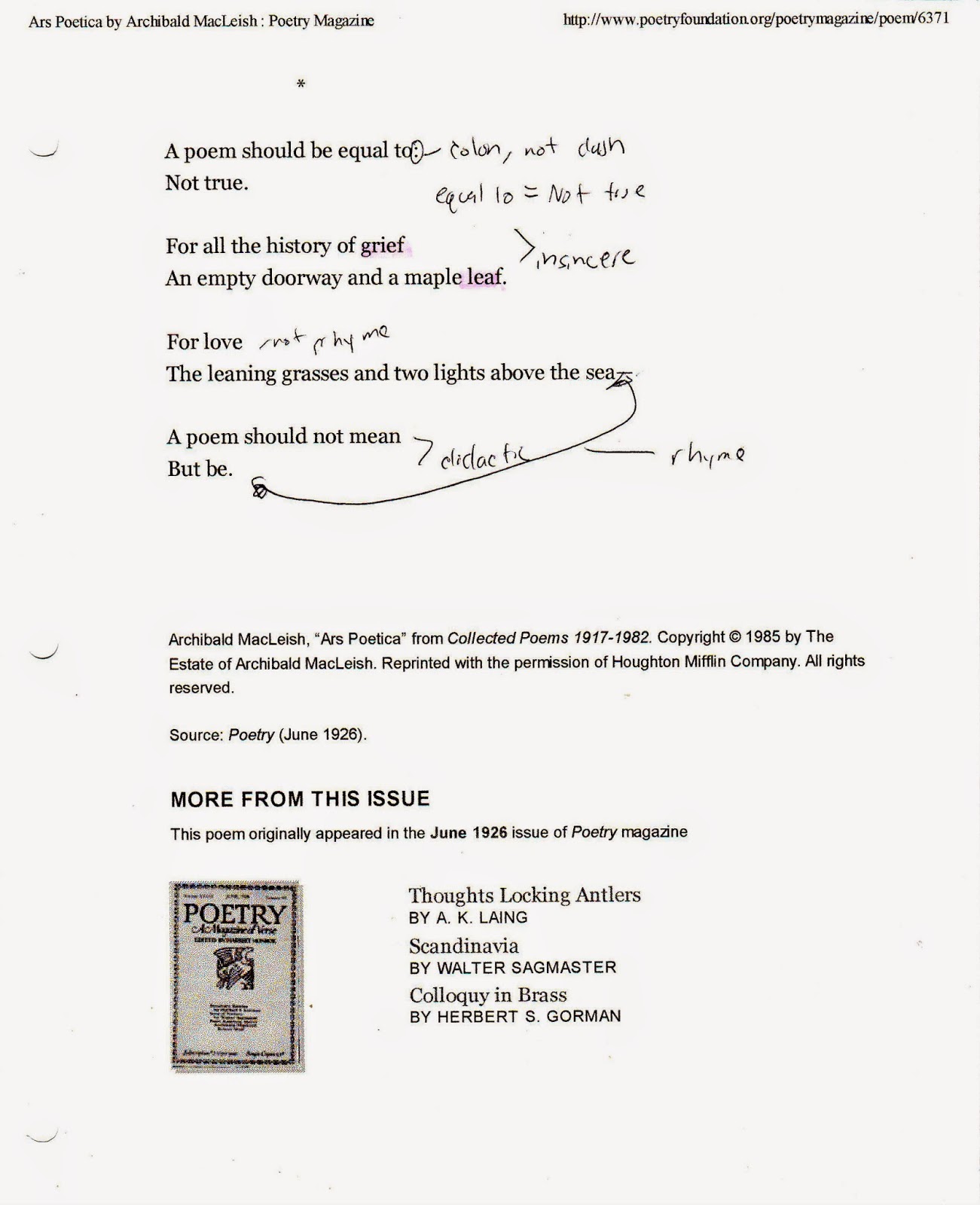 "A poem should be palpable and mute / as globed fruit,"  This is how this poem starts out -- humorous rhyme with the images being as realistically awkward as possible.  The funny thing is that this "Ars Poetica" or a poem about writing a poem changes but the form is the same -- couplets -- the writer and his words.

"Dumb / as old medallions to the thumb"   I was thinking that this was a older version of "dumb" as in mute but here I think that the reader shouldn't take the meaning too seriously and look at the rhyme scheme for the sake of rhyme scheme.

"Silent as the sleeve-worn stone / Of ceasement ledges where the moss has grown."  And in this case, there's a play of the definition of dumb coming back to the next stanza (silence) and the image of layers -- the ledge and then the moss.

"A poem should be wordless / as the flight of birds."  The flight of  birds announces a coming or departure, but doesn't state -- "the bird is departing".  I'm not too sure if this is the meaning, but the simile becomes more serious and a bit more theoretical in approach.

I'm not too sure about the break, but it does separate the poem into four couplets.  However in this sections there's repetition, but the concepts are more or less contained in the couplet.

"A poem should be motionless in time / As the moon climbs," past me noted, "simile? serves as a 'time' indicator, prepositional phrase."  I think this is the beauty with this line is that the language turns the meaning -- "as the moon climbs" could be a time indicator or a comparative one or both.  Is it important to decipher what the moon means w

"Leaving, as the moon releases / Twig by twig the night-entangled trees,"  the image of the moon continues with the rest of the section but note how the images become more surreal.  But it is not in the images that the poem is made, rather it is the connection to be made through not likely images -- moon and night tangled trees.

"Leaving, as the moon behind the winter leaves, / Memory by memory the mind --" and then to the personal  Note here how specific  winter is here as setting that relates to memory.

And then the repetition of the beginning stanza of this section, "A poem should be motionless in time / As the moon climbs" now has a different context as this couplet relates to memory of a poem more so than a concept.  Shift.

"A poem should be equal to: / Not true."  The colon to cease the line into a definition.  So should the line read that a poem should be not true or should a poem not be equal to.  Again the haziness of the line creates the tension in the poem.

"For all the history of grief / An empty doorway and a maple leaf."  This is more of a play of the signifier and the  and the signified -- the concept is grief and the image that represents it is an empty doorway.

"For love / The leaning grasses and two lights above the sea,"  Once again signifier and signified, but in this instance the concept is love and a transitional image of leaning grass and two lights above the sea (which I'm thinking is stars) note though in the past two stanzas that the tone of seriousness and reverence is here with contrasting images where as before in the beginning the images served as play.

"A poem should not mean / But be." Not true.  Well sort of.  Here the poem does go along with being through the images, but the past two stanzas described the meaning of the images: love and grief.

I think what the last stanza does is subverts rather than define.  Every instance of how a poem operates is subverted: meaning to no meaning, initial to final meaning, humor to seriousness, that the "be" aspect doesn't mean to exist, but change, contradict itself sometimes or even mean something.
Posted by Retailmfa at 5:00 AM