Analysis of "The Man with the Hoe" by Edwin Markham 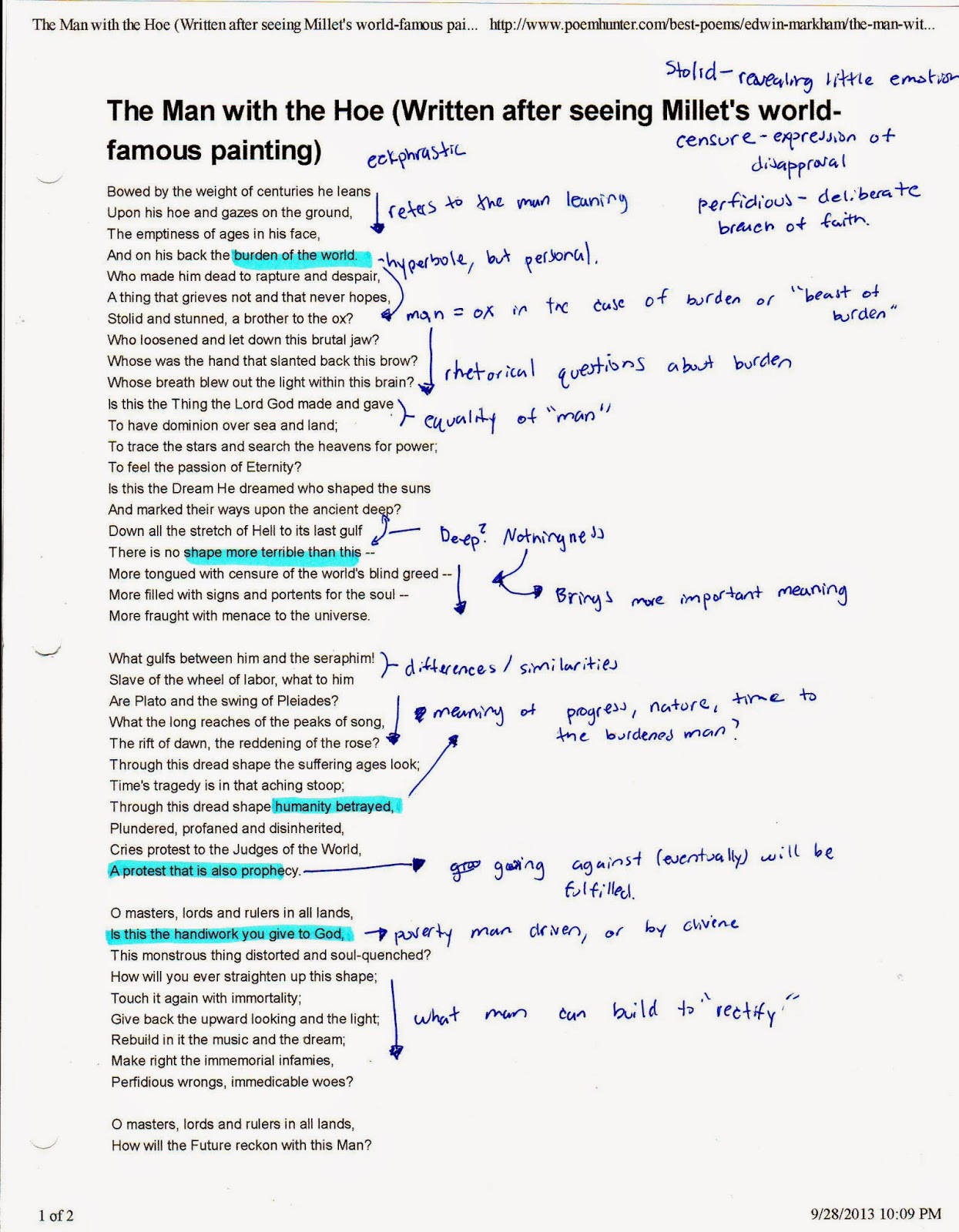 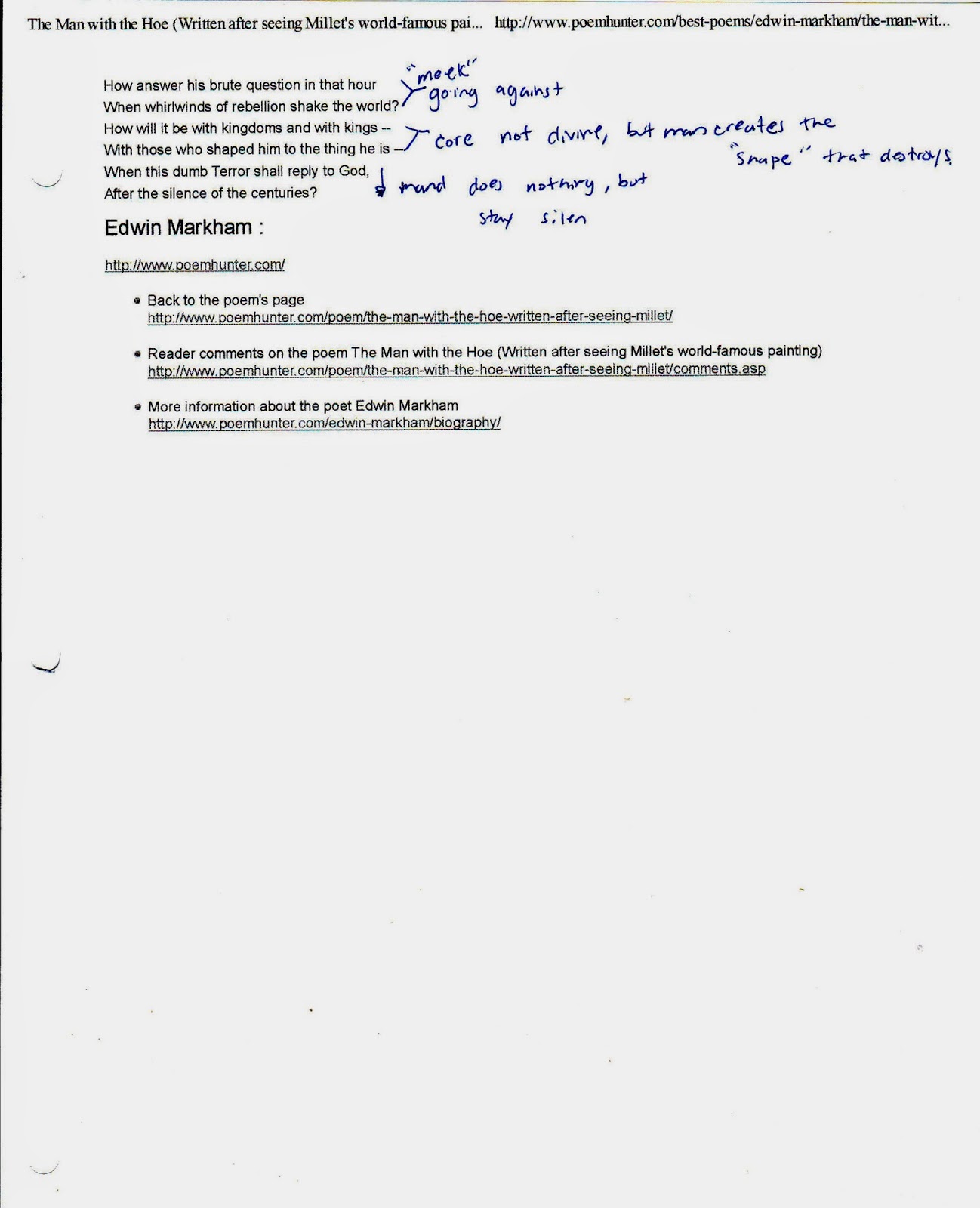 This poem is an eckphrastic piece based on this painting by Millet. 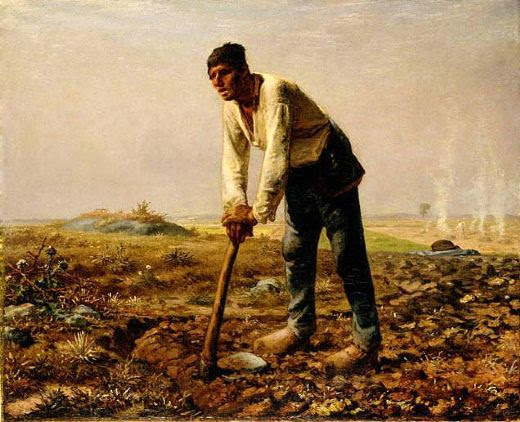 What the speaker does in the poem is relate the singular image to an expansive one and back to a singular one again -- as though to dig for apparent meaning.

"Bowed by the weight of centuries he leans / Upon his hoe and gazes on the ground /The emptiness of ages in his face."  already the speaker is going for a very broad rhetoric with general terms like "centuries" and "emptiness" appropriated to the man in the portrait who is now become more of a symbol for the reader to sympathize with.

For the man is, "made him dead to rapture and despair / A thing that grieves not and that never hopes / Stolid and stunned, a brother to the ox?"  Beast of burden.  The speaker is adding more and more meaning to his propped up symbol against another symbol of those that "made him" this way.

The list of rhetorical questions transforms the symbol into the beast of burden:

Who loosened and let down the brutal jaw?
Whose was the hand that slanted back this brow?
Whose breath blew out the light within this brain?
Is this the Thing the Lord God made and gave
To have dominion over sea and land
To trace the stars and search the heavens for power;
To face the passion of Eternity?

Note how the transformation focuses on the symbol then expands outward to the divine.  And note the divine here is used somewhat cynically -- who has dominion over beasts -- man.  But who makes a man into a beast -- man? Divine?

The rest of the stanza faces the divine, so if heavenly will pushes man back down then "hell" does this:

There is no shape more terrible than this --
More tongued with censure of the world's blind greed --
More filled with signs and portents for the soul --
More fraught with menace to the universe.

The key here is the use of repetition: anaphora of more and dashes to simulate a build up of want.  More things is needed, but with more there's greed and menace.

And then there is the stanza break, but not a break in the momentum.  The break serves as a focusing device with, "What gulfs between him and the seraphim! / Slave of the wheel of labor, what to him / Are Plato and the swing of Pleiades?"  In one way these lines are trying to find meaning with the man now a beast of burden.  Knowledge means nothing to someone meant only to work.  And this work is central to progress but with a price, "Time's tragedy is in that aching stoop; / Through this dread shape humanity betrayed," with the divine still pushing man down, "Plundered, profaned and disinherited, / Cries protest to the Judges of the World, / A protest that is also prophecy"

The last line transitions to the next stanza and places the speaker as a prophet for protesting, "O masters, lords and rulers in all lands, / Is this the handiwork you give to God,"  Now here the divine is separated into two groups -- God's work, and man, taking up the name of the divine's work.  And what is presented, "This monstrous thing distorted and soul quenched?"  And with the rest of the stanza there's a call to change what is being made with "music and the dream"  But note here the stanzas getting shorter and shorter -- the focus and direction is clear.

The speaker asks this big rhetorical question, "O master, lords and rulers in all lands,/ How will the Future reckon with this Man?"  The previous stanza talked about the present, the ones before that the past, and here we get to see the prophecy through questions, "How answer his brute question in that hour / When whirlwinds of rebellion shake the world?"  Even beasts rebel like angels when pushed with the aftermath being, "When this dumb Terror shall reply to God / After the silence of the centuries?"  Silence, dumb, a reply that is not a reply.

Posted by Retailmfa at 6:06 AM

Email ThisBlogThis!Share to TwitterShare to FacebookShare to Pinterest
Labels: Analysis, Edwin Markham, Poem, Poetry, The Man with the Hoe