Analysis of "Refrain" by Maggie Glover 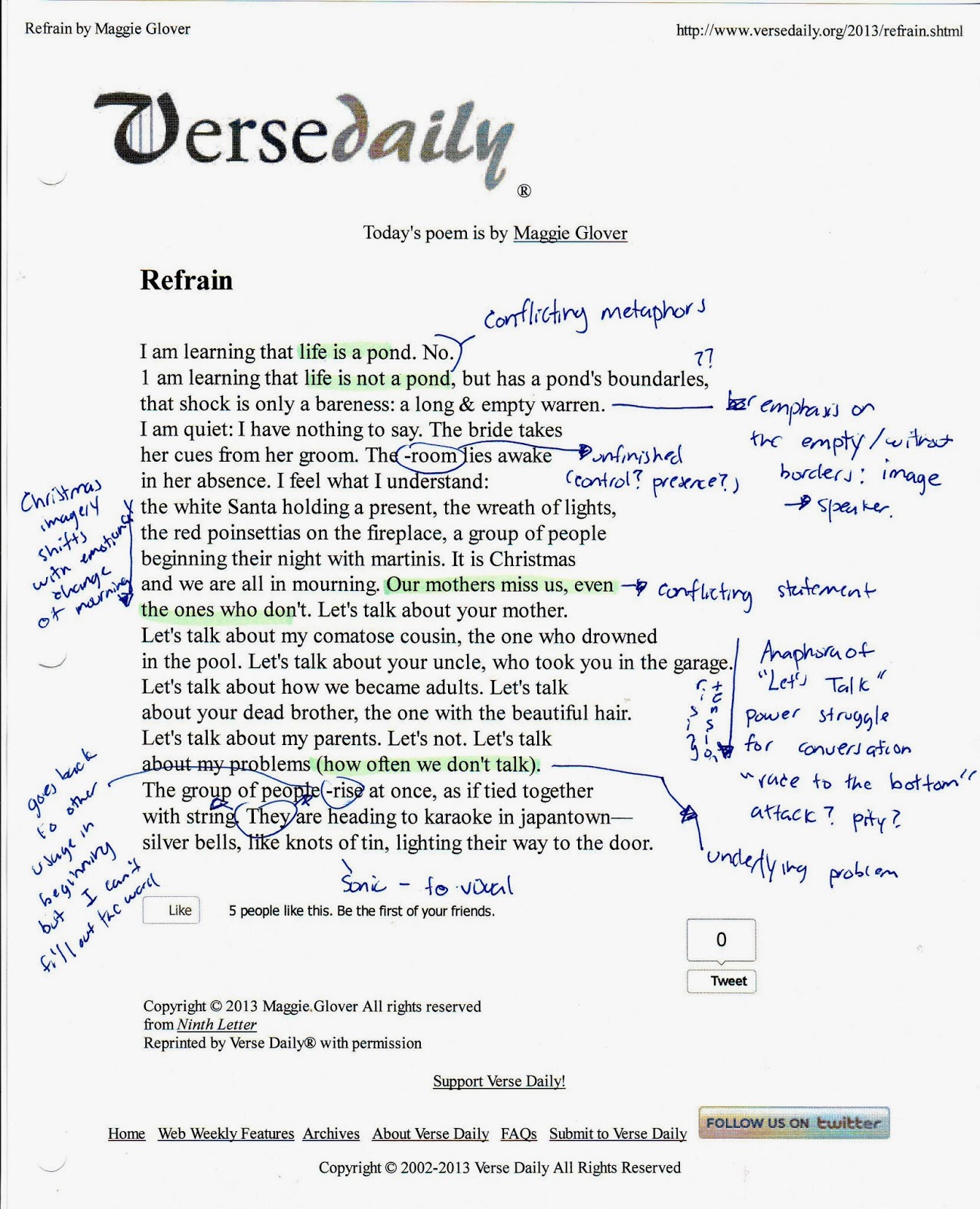 Update:  Got word from the poet, Maggie Glover, "the two '-' before 'groom' and 'rise' were mistakenly added by @versedailypoems & aren't in the original" Yeah, it does change the way I read the poem. Mostly didn't think -room would be groom. I'll get back to this someday, but for now. Here's the analysis as I read it.

Past me wrote something similar for different lines, "conflicting metaphors," and "conflicting statement."  And I think this poem is comprised of conflicts.  Not a conflict that's developed, rather small, sometimes non-sequitur linguistics that change the focus of the line.

For example, "I am learning that life is a pond. No. / I am learning that life is not a pond, but has a pond's boundaries,"  Here the change in language is simple -- a pond versus not a pond.  But the focus has changed to "pond's boundaries".  In this manner the poem can focus on two things -- 1) What is contradictory to the speaker 2) what is the real focus instead of initial focus because the next few lines focuses on on the idea of nothing -- the not, "a long & empty warren, / I am quiet: I have nothing to say."

And even thought this line might indicate a change, "The bride / takes her cues from her groom."  The following lines focuses on visual absence and the absence of another, "The -room lies awake / in her absence/  I feel what I understand:" Note how the "-room" invites the reader to infer what type of room it is.  It could be a bedroom, but it could be something like, "her old room."  By giving the reader to infer on absence there's an investment initiated to the reader.

The poem continues with what appears like a Christmas scene, "the white Santa holding a present, the wreath of lights / the red poinsettias on the fireplace," however, these lines feels like an offshoot of "-room" line in which the absence is explored through "what I understand:"  It's easier to understand images, but not emotions, "It is Christmas / and we are all in mourning."  Comparatively, look how vague the emotion is versus the scene.  Pretty bare.

"Our mothers miss us, eve / the ones who don't"  This conflicting statement, just like the lines in the beginning, opens up what the real focus to the speaker (and not just a saying).

There's the implication that the speaker is wanting to talk to another.  However, as the poem develops, it feels like the speaker is trying to talk to the contradictory self to sort out the self.  Look at the list of people the speaker should talk about: mother, cousin, uncle, brother, parents with only "we became adults" more on the conceptual side.  And then note how all these specific people with their specific one detail is dropped.

Past me wrote, "Anaphora of 'let's talk' power struggle for conversation 'race to the bottom' attack? pity?"  the speed and the lack of exploration creates this tone of building up, as though each line starting with "let's talk" is a barb to the self -- something painful to not explore but to realize exists which is punctuated, once again, by what is not, "Let's not".  Furthermore, the parenthetical support the idea of recognition of the lack of "discussion."

If the poem ended here, I feel the line would be too on point -- too sentimental.  So the last three lines serve as an aside -- a little bit off or a whole lot, "The group of people -rise at once, as if tied together /with string.  They are heading to karaoke in japantown -- / silver bells, like knots of tin, lighting their way to the door."  Here the "group of people" feel like they refer to the speaker's group and by mentioning them, the focus is not how the speaker avoids them, but how they move away from the speaker.

The "-rise" doesn't have the same effect on me as the "-room" line where there's a sense of open interpretation.  The "-rise" seems personal like the speaker would know what to put there, but for me as a reader, "arise" is the only thing that fits for me.

There's no emotion in the movement away, just a visual and a purpose -- going to sing karaoke, and they look bright, sort of obnoxious with, "like a knots of tin"  They exist to as leftovers or causes of contradictions either entering or exiting "to the door."

Posted by Retailmfa at 7:47 AM