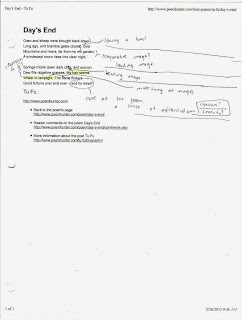 At the end of this poem I wrote, "cynicism? / sincerity?"  And, although the last line is very loaded -- "and for what?"  The progression the poem takes questions the intent of the speaker.

In these two quatrains, the first stanza hints at a return, "Oxen and sheep were brought back down / Long ago, and bramble gates closed."  Note how the line reinforces two ideas -- the return and never exiting.  The animals were brought in long ago, and the gates closed behind them.  Now, this doesn't seem like much, but in a sparse poem, every image stands out, meanwhile, every action is buffered in this poem since the sentence construction is written in the passive.   Like my previous sentence.

The next line, "Over / Mountains and rivers, far from my old garden, A windswept moon rises into clear night."  The images of mountains, rivers, moon, and night are vivid detailing the scene, and in this line the speaker somewhat introduces himself in the line "my old garden."  Note that the moon rises and is strongest visual image among the rest because the action and placement happens last in the stanza.

In the second stanza, the first line, "Springs trickle down dark cliffs, and autumn dew fills ridgeline grasses." The stronger image is Spring (whatever the word conjures up) and "Autumn dew."  But also note the progression of time and how the images are based on water "trickle" and "dew" as though entering and receding like the speakers hair.

The color of the hair (not so much the hairline) is written about -- "whiter in lamplight."  So note that the speaker is in some kind of darkness and the illumination of that single image -- the hair comes into focus -- white.

The last line, "The flame flickers / Good fortune over and over -- and for what?" is what confuses me still.  The flame flickering seems analogous to the good fortune, but the question at the end -- I don't know the tone of it.  So, well, I'll break down why I think it's one or the second tone, but not both.

Cynical -- Everything is the past is made up of images that is now gone or receding.  The moon, the mountains, the cows and the oxen overtake the poem, but for what?  To hide the fact that these animals and actions mean nothing to the speaker and is now contemplating what matters.

Yeah, I don't know if this makes sense.  It probably doesn't.

Posted by Retailmfa at 9:15 AM