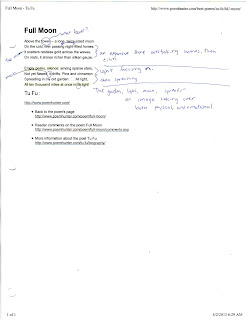 Tang Chinese Poets.  I don't know how many times I've heard that they were a big influence in someone's poetic work.  And, from my reading of Li Po, Tu Fu, Po Chu II, and Wang Wei -- the focus for me is how the image is implemented in the poem.  There's a visual concrete presence that moves in the majority of the poems of Tang Chinese Poets.

There are only two quatrains here.  The first focuses on the location of the full moon which is above human constructs (a tower) passing over.  The first "it" in this poem occurs in the third line with "It scatters restless gold across the waves" and the ambiguous pronoun refers to the image of the moon.  However, the implications of the presence can be appropriated to the overwhelming nature of the moon or rather how does the reader anthropomorphizes "it."  And through the anthropomorphizing there's a certain benevolence to the it, "On mats, it shines richer than silken gauze."  What I mean is that the presence of the moon, the "it,"  comes more into focus that the actual thing.  Signifier, the moon, turns more into the signified, the presence.

So that's one way my not so sane mind looks at the usage of "it" in this poem.  There's another way of reading of "it" as blurring of subject matter.  These lines, "Empty peaks, silence: among sparse stars, / Not yet flawed, it drifts."  It here, grammatically speaking, refers to silence.  However, I see the it also referring to the moon as well.  Logically, the grammar indicates one thing, but the usage of "it" in the first stanza as a strong signifier has me in mid shift with the definition of "it" so both silence and moon mean approximately the same thing because, well, the image of sound and visual fit.

I think the last line brings together the miscommunication which creates anthropomorphizing and the miscommunication of blurred subject matters together.  "All light, / All ten thousand miles at once in its light!"  Note that the usage of "all" brings the attributes of the moon, and the moon itself into the ephemeral but not judgmental -- the focus is the attributes of the moon, not what the moon symbolizes.
Posted by Retailmfa at 12:31 PM