Analysis of "The Wife-Woman" by Anne Spencer 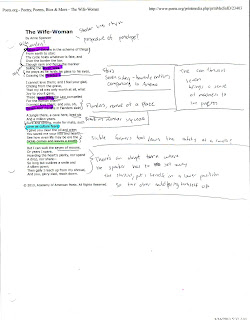 For a poem that is so focused with the idea of seven, it's kind of ironic that the form is in octaves.  I hope I am using "ironic" correctly.  In any case the use of allusion punctuates the reoccurring number of seven and I feel this poem is an exercise that pushes the idea of allusion, numbers, stream-of-consciousness in more of a riff jazz style

Yes, I'm adding this in because I read that Anne Spencer was part of the Harlem Renaissance.  But the poem makes more sense to me with more context.  Such is the problem with historical context and allusion.  I do want to add though that the poem interested me enough to look up the allusions and see how they relate to one each other.

The connections don't matter in stanza two; rather, I feel that the first stanza shows that the speaker is capable of bringing in allusion, and in stanza two undercuts them because, "I cannot love them" or rather there isn't an emotional appeal with only allusion alone for the speaker.  "I feel your glad,"  The line here feels like it was made on the spot to indicate a sense of empathy for the other (who happens to be dead" -- but from a distance, "Joy to you it gave." The other can feel, but the speaker cannot.

But then the number seven appears again with the line, "These seven links the Law compelled / For the human chain -- / I cannot love them; and you"  These lines haunt me in it's earnestness.  The you isn't well defined (like the Maker of sevens) but with every line the speaker creates distance, but then wants.  Usually, I would find this sentimental, but I feel the technique -- allusions and running theme of seven, take more of a hold, or rather is the focus, and little lines like these add perspective to the poem.

In the third stanza, there's a leap to the past -- and more of a focus of the title "The Wife-Woman."  Stanza one describes the other, stanza two describes the speaker, stanza three focuses on the core -- as in the past, "Sure and strong, mate for mate, such / Love as culture fears." Then the concept of love (not bringing in the emotion context to it) is examined.  If culture fears love, then what goes in it's stead, "I gave you clear the oil and wine; You saved me your hob and earth-- / See how even life may be ere,"  So there is a bit of an over emphasis of "even" but the speaker exchanges physical food, and the other "saved me your hob and earth--" or whatever is left over.  The idea of love being equal isn't good enough, the false sense of the other saving the speaker, however, ideal.

Note how I don't assign tropes on the speaker and the other (other than the Post-Colonial Criticism jargon) since the nouns are basically ambiguous, then, I feel, the reader can add any trope here and it would fit -- man/woman, black/white, old/young, gods/human, shadow/self, rich/poor.

The last stanza has more of a rumination quality to it, "But I can wait the seven of moons" and in doing so, "hoarding the heart's plenty" -- the speaker can wait, but grows number than before.  Then the last couplet, "Then gaily I reach up from my shroud, /.And you, glory-clad, reach down"  feels cynical to me.  The other has the capability to save the speaker who is in a "shroud" which is constructed by the same other trying to save the speaker.

The speaker isn't playing the victim card, rather pointing out discrepancies within tropes.
Posted by Retailmfa at 9:26 AM