Analysis of "Persimmons" by Li-Young Lee 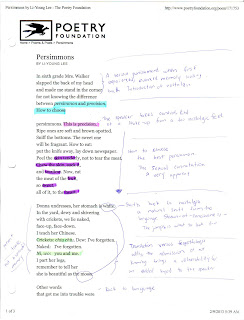 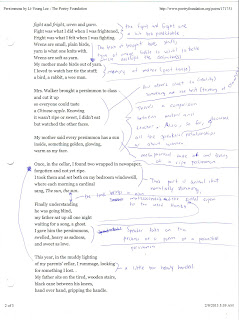 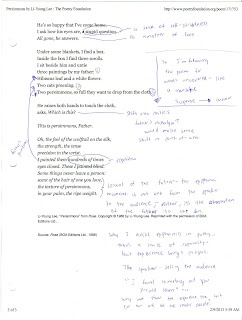 When I first read the collection "Rose" I thought the writing was so smooth.  The way the narratives constructed themselves seamlessly from memory to present especially in poems like "The Gift" and "Rose"; furthermore, the narrative don't come off as fables, or overly-didactic, even though the narratives themselves have a fable and/or didactic nature to them.

Rereading this poem in Febuary, and now, I  knew I wanted to go back to this poem because of the technique Li-Young utilizes here.  I want to know how he constructs his narratives and learn from his techniques.  I also want to know how the poem continuously borders on sentimentality -- sometimes the line is crossed, but the majority of the time there's more to the scenes.  I also want to have the voice like the speaker who seems vulnerable but not pitiable, learned but continues to learn.  So there's a lot I want to learn from this style; however, I'm pretty sure I haven't picked up on the "how" completely though.

The narrative of the school is told through installments.  The first being where the speaker is "slapped [on] the back of [his] head" by the teacher for not knowing the difference between persimmons and precision.  The misinterpretation  starts off a narrative stream-of-consciousness based on both words which separate but meld the words together for example how the speaker (so smoothly) describes the way to eat a persimmon in very erotic terms, "chew the skin, suck it, / and swallow.  Now, eat / the meat of the fruit, / so sweet , / all of it, to the heart."  Maybe I'm just a pervert.  However, the description does lead to the stanza about "Donna."

First, I want to write that maybe the specific name brings a personal flair to the narrative.  Donna.  I can imagine that putting a name in a poem would lead to a) confusion or b) sentimentality.  However, the stanza doesn't go with the "I love you" approach.  Rather there's the attention to language -- how intimate language is like lovers.  Wow, did I actually write that.  Well these line:

The stanza focuses on language, yet the approach is really important here because although it's translation -- it's personal translation.  The speaker gently brings himself to the definition and reminds the reader that the language between them is mostly between them.  We, as readers, look on as voyeurs who also learn something.

Then there's more misinterpreted closely related words like, fight and fright and when and yarn.  And the class not being able to know about Chinese Apple, persimmons.   There's a separation. The stanza about the mother is important to show the kind of relationship they had.  However, I feel the stanzas hit the sentimental hard since it's the speaker's interpretation of how the mother saw the speaker -- that the speaker could do no wrong.  I think that's where the line is crossed.  I can accept a one sided narrative from the speakers perspective in an observational sense on subjects like love and misinterpretation, even death.  But the add more elements then the risk is greater, and for me the stanzas are sentimental, but didn't dissuade me from the poem (I'm heartless but I like poetry -- not really a good mix).

Yes the last lines of the poem:

Some things never leave a person:
scent of the hair of one you love,
the texture of persimmons,
in your palm, the ripe weight.

Collects all the pieces of the stream-of-consciousness  narratives and brings an epiphanic moment to them.  Current me thinks it's fine -- I'm more intrigued with other aspects of the poem (listed above); however past me saw things differently:

"Lessons of the father -- the epiphanic moment is not one from the the speaker to the audience -- rather, it's the observation of the father to the son.

Why I dislike epiphanies in poetry...there's a sense of superiority -- that experience brings insight.  The speaker telling the audience "I found something out you should learn" .. Why not show the experience the best you can and let the reader decide?"

So when I reread this today, I thought to myself I'm mixing up "didactic" and "epiphany."  Didactic  enforces the lesson onto a reader -- "the moral of the story is..." which breaks away from most if not all techniques in a piece where the moral shines brighter than the piece.  Aesop fables is a good example of this.  Yes, work hard because you'll be the grasshopper who dies in winter.

Epiphany, although has some characteristics of being didactic -- is more focused on experience, the "I realized moment"  And there's a line crossed when the speaker says he/she learned something like "life after death" or "don't feed an angry cat" lessons better extrapolated than reiterated.  And the first part makes more sense.  The father telling the story to the son, the reader and the speaker as the observer -- there's no judgement call, no "you will learn this" rather a nostalgic lesson that the father has learned and wants to pass on to a son -- like in the poem "The Gift" and the poems in the collection.  The speaker wants to soak in all the lessons as does the reader.

Posted by Retailmfa at 9:49 PM