Analysis of "Legend" by Hart Crane 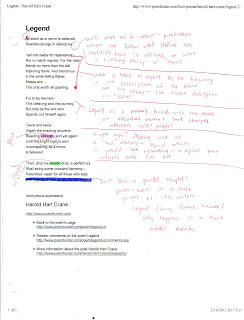 I have a hard time with Hart Crane in general.  He's poems like "The Bridge" and "For the Marriage of Faustus and Helen" are interesting technique and subject wise, but very hard to decipher why and how those techniques and subject are used.  I like his work, but I kind of distance myself from his poems unless I want to spend many nights deciphering individual lines.

But when I came across this poem, I thought, "this one isn't too much for me to handle" after the first read.  And after the second read I know how I want to analyze this poem -- through one line.

"The legend of their youth into the noon"

This doesn't seem much but there are two words to look out for in the poem, "legend" and "noon"; or rather, how the speaker configures and constantly redefines these two words not through repetition, but how the words are defined through different perspectives.

"Legend as silent as a mirror is believed / Realities plunge in silence by..."

I'm not a big fan of ellipses as usual, but the idea of legend is a silent visual -- maybe a reference to Narcissus, but the "reality" is well silence.  So the focus of what a legend is is visual.

The second stanza introduces the I speaker and there's an idea of repentance nor "match" (pun probably intended) regrets.  I want to believe that the idea of not repenting or having regrets leads one to hell -- well at least for this poem, because the image (that, note once again, I inferred, not so much in the poem) goes well with the metaphor of the moth  towards the flame leading to the image of "tremorous / in the white falling flakes"  -- the moth turning to ash.

And then the line of "Kisses are,--"  the syntax, and the stand alone line of sorts -- this is the regret or repentance that the speaker is going to forsake -- "the only worth all granting,"

Past me wrote this about the entire third stanza, "Legend as a memory burned into the mind.  An individual moment that changes influences? self? people?"  When I reread the third stanza, I figured that this stanza and the last differ in tone.  The second has more of a longing tone, while the third has more of a didactic tone as though pushing away the sentimental implications of the "kisses" line.

The fourth stanza reverses the senses when dealing with the concept of "legend" and "burning."  Legend takes on an "eidolon" stance -- one of a ghost or a smoking souvenir.  Something that's once again silent, but visually intangible even though the image is burned in the mind.  Furthermore, the image of burning becomes more visual with "bright" logic.  Past me wrote, "bright logic?  Making sense of 'bad' memory -- legend which is untold but remembered -- a legend that reflects onto self."  I also want to add that the simile as a legend returns in this stanza (from the first stanza), but the different is the adjective "unwhispereing" which goes towards bright logic (I thought it was an adverb at first).  The term can be heard a silence or something so loud (as in bright loud).  The word cuts both ways.

The last stanza returns to the sound image of "a perfect cry / shall string some constant harmony,--"  I really don't know about these lines.  I find these lines to make sense as a turn for the speaker to find the harmony between image, what is believed, to the actual -- however, the turn is too jolting as far as tone and image goes.  I like the last two lines better, "Relentless caper for all those who step / The legend of their youth into the noon."  The fire image at noon represents the highest point, also I think the closest point to the earth at that time (I'm not sure about the science in my logic here).  Also not the idea of youth as legendary, as a high point -- however doesn't apply to the speaker -- rather the images that the speaker is trying to attain.

Yeah, Hart Crane.  I'm pretty sure this is wrong.