Analysis of "A Fable" by Louise Glück 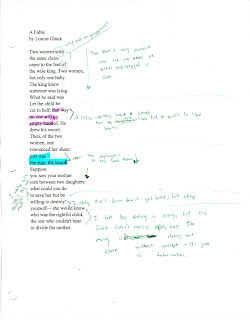 After rereading this poem, I remember how I try (with every blog post) to separate Poetry and Prose.  Now I think I've argued why certain poems should be prose; however, not the reverse, some prose should be in poetry form.  I wonder why.

For example, "Two women with"  ending with "with."   I remember back that writer's shouldn't end a sentence with a preposition.  I never fully understood the reason why.  However, in this poem, I have a reason why.  Ending with a preposition forces to reader to go to the next line or sentence as though the speaker has withheld something -- a piece of information or ideas.  I feel that once it's cool, but twice within three line -- it's a little much.  I know this is very nitpicky, but, I notice, now and past me, these things because the lines are shorter and there's more attention to every single word.

The flow of the poem is stilted through the short lines; however, if they had a better flow, the plot could be the focus instead of the language.  Yes, it could be that the writer wanted the short lines in order to disrupt preexisting thoughts about Solomon's predicament with the focus on women. But the short lines really detract from this for me (something I didn't notice before when I read).

Two-Thirds in to the poem, there is didactic moment when the speaker intrudes to insert a meaning, "this was / the sign, the lesson."

I feel that the bottom one-third of the poem has really good insight and would be good in a short story (akin how "The Grasshopper and the Bell-Cricket" by Yasunari Kawabata work.  The "lesson learned" isn't from the speaker; rather a parallel story at the end where either a) both insights work or b) even though they are similar stories, the insight doesn't work with both.

Then there's a vague sense of parallelism and perpendicularism all at once  as both personal and fable overlay each other.  Yet, the bottom 1/3 is too short and too on the nose, "what could you do / to save her but be / willing to destroy / yourself"  Strong sentiment. but perhaps overly sentimental (to me), if the thoughts were drawn out a bit more, perhaps.
Posted by Retailmfa at 8:42 AM