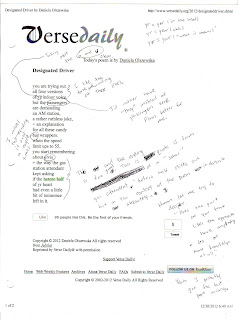 What makes this poem is the opening line for me.  I didn't catch this in my first reading or in my notes, but the shift from "you are" to "yr".  Yes, I know that "yr" is shorthand for "your" in this poem.  But it's more like a double take line on how to receive the sound and sight of words.  For example, if I only heard this poem, then I wouldn't know the difference, but since I'm reading the poem, I can see there's a difference visually.

At the time, I was trying to figure out other ways to look at the way "yr" is used because the style is so similar to the Black Mountain School and Robert Creeley (like the poem, "I Know a Man."  But I'm digressing. Each poem, at first, should be looked at individually -- perhaps.  Well that's what I have time for.

"This and the ending is too good.  This quote is from a 'sober' gas attendant 'hetero half' sticks out but in the context of the poem it doesn't absolutely."  I don't know what I mean here.  I think when I think 'hetero' my mind goes automatically to sexuality (love with the opposite gender).  But what if 'hetero' in the poem means different, other.  The meaning of the poem changes depending on how to interpret the poem -- listening or reading.

"Hmmm. Let me try to decipher, 'does the part of you that likes the opposite have anything bit of home knowledge at all?"  So I read this way because off "tennessee left" because this implies that the speaker had some tennessee in him/her beforehand.  In a place you call home, do you live in a state of drunkenness -- a sense of numbness and shelter; yet, leaving this place, do you become sober -- and feel everything you intended to run away from.  Not the meaning of the poem, just interesting when I think about it.