Analysis of "Last Hill in a Vista" by Louise Bogan 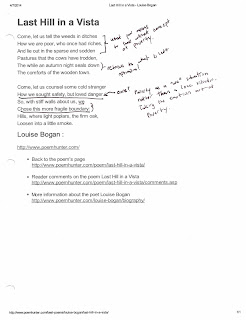 Collective poverty.  These sestets have very harsh and obvious rhyme schemes as well.  I think it's obvious to deflect the harsh reality with some humor.

"Come, let us tell the weeds in ditches / How we are poor, who once had riches,"  When I read this part, I questioned why the weeds.  "We" is already in a low place and the "weeds" parallel not only their circumstance but the place they are at.  This reads like it's from the Great Depression or some sort of economic downturn.

"And lie out in the sparse and sodden / Pastures that the cows have trodden,"  these lines reminds me of the Romantics and how a greater purpose could be found in the sublime through nature.  But with the rhyme scheme and the circumstance, this ideal seems to be jabbed at more so than idealized, but the lines are sincere with the mood still being light in the next two lines, "The while an autumn nigh seal down / the comforts of the wooden town."

The first sestet feels like an exposition.  The collective "we" is poor and find comforts in nature and small towns.  Me, as a reader, is trying to find cynicism in these lines, but the first stanza is has a genuine tone.  And what throws me off is the first two lines in the second stanza, "Come, let us counsel some cold stranger / How we sought safety, but loved danger."

I want to find blame in outside sources in this poem, but it's not there with those two lines.  In fact, the reasons turn inward with "sought safety, but loved danger."  It's as though the collective speaker is turning inwards for the change in circumstance, "So, with stiff walls about us, we / Chose this more fragile boundary:"

So why choose this fragile boundary?  Maybe it's for the love of danger and taking responsibilities of loving danger -- lack of stability, lack of money, but not a lack of place, "Hills, where light poplars, the firm oak, / Loosen into a little smoke."  The first line goes back to this pastoral romanticism which makes sense in the context of the poem, but the last line has more of an ominous image of  "little smoke."  A part of me wants it to be a fire, but based on the poem, I'm not sure.  The smoke could be innocuous, can't we be poor, love danger and have nothing?