Analysis of "Coming to This" by Mark Strand

Poem Found Here: "Coming to This" by Mark Strand 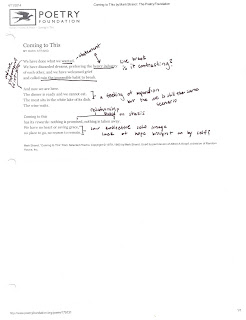 Dead bedroom.  Staying for the kids.  This is what the poem feels like do to he lines, images, and tone of the poem.  This poem does take a different approach to the middle-aged old problem.

"We have done what we wanted. / We have discarded dreams, preferring the heavy industry / of each other [...]" With two lines there a build up of regret with the first line -- all that was wanted was already done.  But not done in the sense of beginning and finishing it, rather of letting go, "discarding dreams." and making a resolution to each other and that takes work like heavy industry.  Work, but not enjoyment.

"and we have welcomed grief / and called ruin the impossible habit to break."

Note the usage of "and" in the first stanza.  There's three instances of "and."  I feel this is on purpose to elongate the sentence to parallel this elongated relationship.  Furthermore, the "and" adds to a series of events just happening.  Grief happens and then ruin happen.  Like people becoming friends after surviving a traumatic incident.  It seems their relationship is quite traumatic.

I'll just let this sit there.  What is here isn't surprising, "The dinner is ready and we cannot eat. / The meat sits in the white lake of its dish. / the wine waits."   Ruin is thinking you want out of this same habit of grief, but no answer is there -- dinner is just dinner, meat is just mean, wine is just wine.  Images aren't answers.  These images serve as reminder of monotony.  I find the attempt to be metaphorical "meat sits in the white lake of its dish" as something the speaker attempts to do to give more meaning to the bland sentence which parallels my perceived notion of the relationships bland life.

But the last stanza has the turn, and an enjambment which is less definite than the end-stopped lines in the second stanza, "Coming to this / has its rewards: nothing is promised, nothing is taken away."  Note here how dead bedrooms is limbo.  No promises that things will change, but also nothing is taken away.  This is classic sunk-cost fallacy thinking which is further indicated with the last two lines, "We have no heart or saving grace, / no place to go, no reason to remain."

To me the last two lines are too on point, too on the nose.  Dead lines.  But I think this is the point of the lines.  Emphasizing having no heart or saving grace, no place to go, no reason to remain -- this constant stream of no, no, no, no.  No to change, don't think no further.  Stay just to remain.
Posted by Retailmfa at 12:00 PM