Analysis of "That was the summer" by Ellen Doré Watson 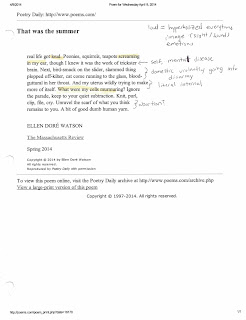 A personal time piece poem.  After rereading the poem and my notes, I think I was overthinking the poem.  This poem is specific, but vague.  There's no direct flow from one idea to the next, but there is a connection with all the events.  This is a poem where the speaker has to buy into this ride of untamed experience.

Oh okay, I get it.  Loud -- probably a metaphor of big life changing events.  But the poem continues with "peonies, squirrels, teapots screaming / in my ear."  The image contrasts sounds so innocuous on the outside, but personal loudness in the inside."  From here, I'm thinking to myself, "okay, small things are loud type of poem, sure."  But then the sentence ends with, "though I knew it was the work of trickster / brain." Now I don't know what's going to happen, but I trust the speakers to show me something which I can't predict.  The line drop between "trickster/ brain" differentiates outside influence or inside.  It's as though the speaker is looking back at the self through the self and acknowledges the past, present, outside, and inside self as separate entities.  Confused? So is the reader?  So is the speaker.

"Next, bird-smack on the slider, slammed thing / plopped off-kilter, cat come running to the glass, blood-guttural in her throat."  This is actual, literal where a bird just slams into the glass door which becomes off-kilter, unaligned, and a cat coming to see.  The word choice of "blood-guttural" adds more violence to a small scene.

The violence continues in small ways, "And my uterus wildly trying to make / more if itself.  What were my cells murmuring? Ignore"  At first I thought this was an abortion, but the replication feels more cancer.  I do think it matters what the images refer to, but I'm more fascinated with the lead up of violence -- small and becoming personal that travels to the physical body to me wondering about the mental state of the speaker.  Ignore other voices, right?  But the line drop once again deflects the continuation of a thought, "Ignore / the parade."  The parade of cells and "keep to your quiet subtraction."  Concrete images and actions that make sense when thought about from a readers perspective, but from the speaker perspective seems terrifying to piece together.

"Knit, purl, clip, file, cry" this list of verbs feels quick as though time passes to try to accept what is going on.  A coping mechanism which leads to two clear sentences, "Unravel the scarf of what you think / remains to you.  A bit of good dumb human yarn."  Again the enjambment points to one meaning, the metaphor of a scarf unraveling the mess of a thought process, but this time adds to the next line rather than deflecting.

The metaphor continues with "dumb human yarn" with the pun being "yarn" (line to create or story) as it seems like the speaker is trying to bring back normalcy, back to where the beginnings make sense. Even though something seems well put together isn't complete and for the speaker.
Posted by Retailmfa at 12:00 PM No comments:

Email ThisBlogThis!Share to TwitterShare to FacebookShare to Pinterest
Labels: Analysis, Ellen Doré Watson, Poem, Poetry, That was the summer 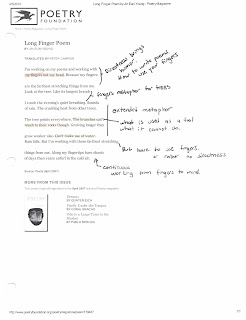 Is this an Ars Poetica poem?  Most likely.  But first let's talk about what's actually happening, "I'm working on my poems and working with / my fingers not my head."  This is what the poem is all about.  Or rather this is the thesis statement in the Ars Poetica.  When writing poem, don't think to much and let the fingers do the writing.  The poem then continues to explain how the fingers work for poetry.

"Because my fingers / are the farthest stretching things from me."  Creating distance. "Look at the tree. / Like its longest branch / I touch the evening's quiet breathing."  What this distance creates is sensation, experience, something tactile.  If the work came to from the mind, would the speaker still experience the "evening's quiet breathing" or "Sounds of rain The crackling heat from other trees."

And even though physical growth comes, "Rain falls."  the metaphor continues to grow and gets "weaker," "But I'm working with these farthest stretching / things from me.  Along my fingertips bare shoots / of days then years unfurl in the cold air."

Regardless of growing weak, the speaker continues to branch further to experience sensations or explore somewhere out there for the sake of poetry.  Even if the branches have nothing, they can still unfurl and feel.
Posted by Retailmfa at 12:00 PM No comments: 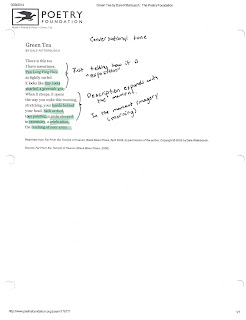 Below is Pan Long Ying Hao, the green tea that this poem is about:

I feel this poem is straight forward in meaning.  The green tea being brewed is a metaphor for how "you" wake up in the morning.  Everything in this poem depends on the understanding of comparative physical imagery.

But first, exposition, "There is this tea / I have sometimes, / Pan Long Ying Hao,"  The tone of the poem is casual, very conversational.  It's like I'm talking to a friend over breakfast and I asked about the tea and the speaker has this magically knowledge to pass down.

"so tightly curled / it looks like tiny roots / gnarled, a greenish-gray" what I like about these lines that it's not a metaphor.  This is literally what Pan Long Ying Hao looks like.  This type of description continues this casual conversation until:

When it steeps, it opens
the way you woke this morning,
stretching, your hands behind
your head, back arched,
toes pointing, a smile steeped
in ceremony, a celebration,
the reaching of your arms.


The act of unfurling is you.  The you that I see as jubilant when waking up.  Simple, right?  However, this makes me think of the speaker and the one being spoke to.  This feels really intimate and personal.  What type of person is the speaker observing to tell the way how he/she wakes up.  And what type of situation.

Does it matter though?  This poem is warm.
Posted by Retailmfa at 12:00 PM No comments:

Analysis of "In My Long Night" by Charles Simic

Poem Found Here: "In My Long Night" by Charles Simic 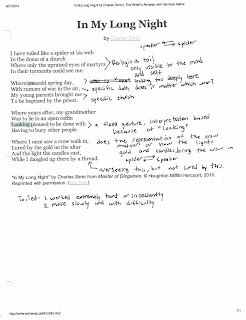 An outsider living in the same place.  This poem plays with the symbolism of images regarding fealty to the church, the same church, and not fitting in.  Note how each stanza is end-stopped as thought to encapsulate an idea or time.  After rereading this poem a couple of times, it's difficult to break up individual lines since the each stanza is powerful as a whole.

However, the poem starts with a small image that expands outward:

I have toiled like a spider at this web
In the dome of a church
Where only the upraised eyes of martyrs
In their torments could see me.


The initial simile compares the speaker to a spider in a web which is subsumed by "the dome of a church" and then moves to tormented, upraised eyes of a martyrs.   For me, the expanse of it all gets to me.  The church being such an overwhelming visual and emotional figure.  This sets up the speakers viewpoint.

Where one cold spring day,
With rumors of war in the air,
My young parents brought me
To be baptized by the priest


The reference to "spring" and "war" makes me think of "The Wasteland" by T.S. Eliot, but only as a reference to time.  What these lines mean to me is that the parents needed to bring their child to be baptized since "the rumors of war" can be actual war.  Everything lost but the soul being saved. This stanza contrasts with the next one based on age.

Where years after, my grandmother
Was to lie in an open coffin
Looking pleased to be done with
Having to bury other people.

This is the struggle that comes forth as grave images in the final stanza.

Where I once saw a crow walk in,
Lured by the gold on the alter
And the light the candles cast,
While I dangled up there by a thread.


The struggle is between this image of the crow versus the speaker as a spider.  The crow image is "lured" by light, gold and candles.  But the crow is only lured to the physical aspects.  There's no genuflecting by the crow or awe reverence, the speaker doesn't place emotions on the crow -- only the crow interacting with the real;  Meanwhile, the speaker as a spider is playing with the idiom of "dangling by a thread,"  It's a pun that devalues the existential curiosity of the church and that's the struggle.  How serious is the afterlife if the real has so much more impact?
Posted by Retailmfa at 12:00 PM No comments: