Analysis of "A Bewilderment" by Bianca Stone 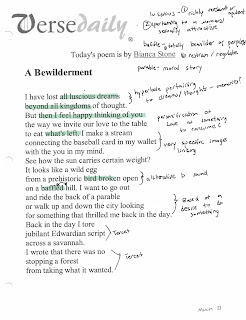 This poem plays with images and memory, and the title of "A Bewilderment" fits the way on how the images are structured and shown.  But we start with a hyperbole first, "I have lost all luscious dreams / beyond all kingdoms of thought."  What's accomplished in the hyperbole is a set-up for the reader -- we're not in a narrative structure, but more of a lyrical one focusing on dreams and thoughts.

"But then I feel happy thinking of you / the way we invite our love to the table / to eat what's left"  I like these lines since these lines are trying to bring in the conceptual -- the love of the "you" figure and bring it to something more, something concrete as the images continue on with the you.

And even though the next rhetorical question seems innocuous, "See how the sun carries certain weight?"  To me, there's something desperate about the line.  Not in an obvious way, but it's a line trying to get on the same page, to see the same things.

But the follow-up deflates any sort of weight and seriousness of the line with the simile of, "It looks like a wild egg / from a prehistoric bird broken open / on a baffled hill."  The image taken to far when meaning isn't there.  And in that instant, the focus goes back to the I speaker.

The speaker is moving on.  Not with emotion, but with momentum to find that thrill.

"Back in the day I tore / jubilant Edwardian script / across a savannah."
"I wrote that there was no / stopping a forest / from taking what I wanted."

I'm not good with my memory of Edwardian scripts, but, to me it's the indication of wanting something written that sticks and nothing truly sticks if it's just words and an image.  Those wants and emotions long gone from the image.
Posted by Retailmfa at 12:00 PM No comments: 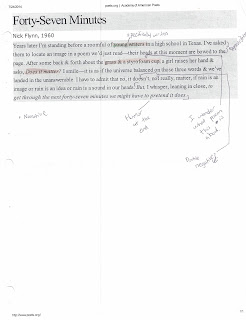 I've been here.  Many a times.  Teaching poetry to anyone is tough already.  Poetry is one of those forms of literature where there always as search for a bigger meaning in a short amount of words and time.  Yes, poetry has been used to teach critical thinking but not necessarily a love of literature.  Everything must mean something.

Well with this poem, the concept of everything is in question.

The poem starts out with a disorienting sense of time, "years later."  Maybe this poem is part of a collection or something is in conversation with this poem because the poem is not situated for me and  I don't think this poem is trying to do that in this way.

Anyway, the poem  takes place in a Texas high school classroom where the instructor is asking his students to "locate an image in a poem."  And it such a good class to have their heads bowed to the page.  A classroom of probably 30 odd teenagers apt and ready to explicate a poem, sure.

"After some back & forth about the grass & styrofoam cup, a girl raises her hand & asks, Does it matter?"  This question has such variable existential weight to it.  This question could only refer to this unit they're covering -- is this going to be on the test type of question.  However, the speaker elevates the question philosophically, "I smile--it is as if the universe balanced on those three words & we've landed in the unanswerable."  The humor comes out with such hyperbole of the moment.

But this is how it feels like sometimes when teaching.  That's explained later on in the poem.

The speaker that no it doesn't matter if "rain" (perhaps an image in the poem they are reading) can be classified as an image, idea, or "sound in our heads."  I feel the lines is trying to explain these points as though to test prep.  Like the question on the test is "what does rain mean in this part of the poem a) image b) idea c) sound d) all of the above."  As though any and every meaning of the poem has a correct way to do it, and is all calculable, scored into competency.

But I digress, a bit too personal.

The last sentence is what I'm actually thinking when teaching a class that I don't know how to answer the existential question of "why" that is so common with students, "But, I whisper, leaning in close, to get through the next forty-seven minutes we might have to pretend it does."

The "might" here is really important.  Without it, the last line is a funny confirmation that, yes, both parties are playing the game that this information is useless busy work in high school.  The "might" shifts the game.  The speaker can or cannot pretend this matters and so can the student.  And the ambiguity, like meaning, is answered by the individual for whatever path to go to.
Posted by Retailmfa at 12:00 PM No comments:

Analysis of "Here Dead We Lie" by A.E. Housman 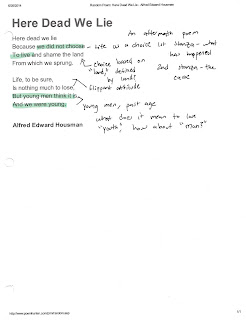 The version I linked is from the poets.org website which is a quatrain;  However, I analyzed a different version which is in two quatrains.  I actually like this version better because there's more dramatic tension in the line breaks.

"Here dead we lie/ Because we did not choose" ends the line with a blame mentality.  We didn't choose to die, but something else caused us to die, "To live and shame the land / From which we sprung."  The first line of the two lines has more of a weird overall feel until we get to the specific in the next line of where they "sprung" or originated from.  This brings a sense of nationalism and patriotism in a simple form.

The first line of the first stanza is the outcome of a mixture of emotions: blame in the second line, then a bigger reason as the purpose in the third line, and the last line focusing on the specific, but unnamed place in which these people lived.

The litotes from, "Life, to be sure, / Is nothing much to lose," brings a sense of sarcasm to what is lost.  They are dead for the bigger cause.  However, if read as though the lines are sincere the last two lines wold turn back on the "place they sprung" their homeland.

But the last two lines go back to them.  These young men, "But young men think it is / And we were young."  The emphasis of youth, their youth, brings out the sarcasm more in the previous two lines.  The people, the youth mean more than just a shamed land.
Posted by Retailmfa at 12:00 PM 2 comments:

Analysis of "Hair on Fire" by Jim Daniels 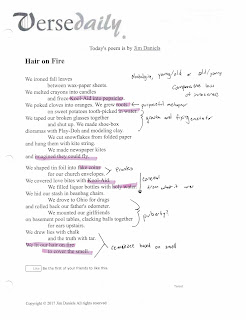 The adjusted lines foreshadows that things changing from one side to another.  On one side, the idealization of youth through very specific images; but on the other side, there is the, no so much the reality, but a shift on how the images differ with age and/or time.

The beginning there's arts and crafts that the all encompassing we does:


For me, it's interesting to see that the images themselves transform into one state to another -- crayons to candle, liquid to solid.  There's a lot going on in the first few lines and images that work hard to convey a shift  I'm not sure what "cloves into oranges" mean but the next line of "We grew roots" brings attention to itself through the enjambment and directness which slips away with "on sweet potatoes tooth-picked in water.

At this point, the images are safe and maybe a bit saccharine, but this line, "We taped our broken glasses together / and shut up ."  Feels a bit sinister.  Like something's off -- like a repressed memory.  The rest of the images follow the pattern though:

The part of the poem with "imagined they could fly" follows along with this kind of idealization or a sense of youthful thinking.  But there's something off for me.  I don't know how to explain the offness of the line.  A part of me thinks there's something sinister comes from it -- like expecting the fall from idealization, but I might be reading too much into the line.

In either case, this makes me look for something wrong in the second stanza.  For example, the opening lines, "We shaped tin foil into fake coins / for our church envelopes."  Although dishonest, this seems like a continuation of a childish experience -- giving fake coins to a church.   And this feeling of something is off continues with, "We covered love bites with Kool-Aid" in which the image of the Kool-Aid conjured in the beginning transforms into something that hides love bites -- maybe something more "teen" oriented like filling liquor bottles with holy water or hiding the stash in bean bag chairs.

But the line "We drove to Ohio for drugs / and rolled back our father's odometer" is specific and changes things to something teen oriented of not getting caught when buying drugs.   Every "growing up" experience becomes specific and laid out like "We mounted our girlfriends / on basement pool tables, clacking balls together / for ears upstairs."  Doing something more adult oriented, but always trying to not get caught.  Although the next two lines are more abstract, "We drew lies with chalk / and the truth with tar" the meaning of the title of the poem comes into play, "We lit our hair on fire / to cover the smell."

The smell of truth and lies, and also of growing up and not getting caught doing so.