Analysis of "By Force" by Carl Phillips 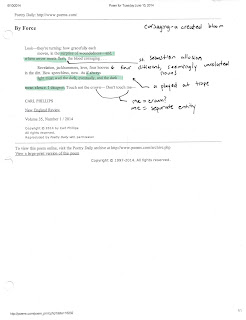 The progression of voyeurism, "Look -- they're turning: how gracefully each / moves."  The movements up close bringing a sense of intimacy, "in the surprise of woundedness--and, / where arrow meets flesh," the allusion to St. Sebastian here brings this encounter on a historical resonance, "the blood corsaging" the image is pretty and sexual at the same time.

Then there's this list that creates this tempo of sexual sounds, "Revelation, jackhammers, love, four hooves / in the dirt."  This continuous pounding sound -- physically and auditory leads to a silence, "How speechless, now"  There's an abruptness in the language -- is this post coitus -- that breath, then the regret.

Or rather the clarity one gets after an orgasm, when the mind is not driven by the body and the sound of the body.  Then the language of the poem becomes more like an equation, "As if always/ light must wed the dark, eventually, and the dark / mean silence."  There's a sense of a resignation of this cycle. can continue until the speaker becomes empowered, "I disagree."

"Touch not the crown-- Don't touch me--"  The me and the crown comes off as a parallel image.  A sense of importance and worth.  This is why the speaker can say, "don't touch me."  By force, what type? Consent? An uncontrollable urge?  It's both.

Analysis of "The Want of Peace" by Wendell Berry 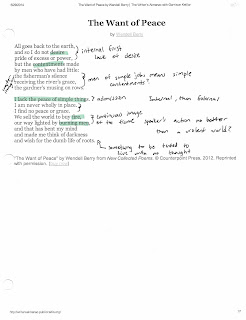 "All goes back to the earth," is such a strong statement of resignation.  Welp, we're all dust in the wind, so what?  The "so what" is the point of the poem.  Written in first person, the speaker thoughts and experiences relate to what he/she things of "all goes back to earth" or what to do until that happens.

"and so I do not desire / pride of excess or power"  pretty basic set up lines.  Also, the lines come off as grandeur but broad.  Regardless, If I don't wan't "x", usually I want "y."  y being:

but the contentments made
by men who have had little:
the fisherman's silence
receiving the river's grace,
the gardener's musing on rows

The statement of "men who have had little" makes this poem turn towards class.  Can't rich people be fishermen and gardeners?   Yes.  But those whose lives depend on the silence, the river's grace, the ability to muse on rows to get through the day.

This sets up the next line, "I lack the peace of simple things."  Note that the picturesque scenes above represent "simple things" due to the placement of the line if contentments and simple things mean the same thing.  But also note that this doesn't mean the speaker is "rich" in only the materialistic sense.

I am never wholly in place.
I find no peace or grace
We sell the world to buy fire,
our way lighted by burning men


The poem expands outward where the "I" becomes "we".  The speaker and everyone is to blame for selling the world to buy fire in the backdrop of burning men.  Also note the images expand outwards like the speaker.  In the blur of description, this is the "reality" that the speaker does.

The reality makes the speaker introspective:


The introspection is simple.  People like me do bad things, I want to go back the foundational simple things. I get it.

But broad brushstrokes that define the speaker and predicament with the reaction equally broad and hyperbolized.  There's this feeling of lack of definition that drew me to this poem.  Is the big sense of peace just as wrong as selling the world to buy fire because the lack of direction and description?
Posted by Retailmfa at 12:00 PM No comments: 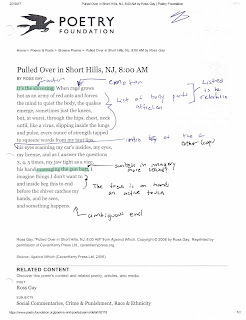 A situation trigger.  I'll skip ahead a bit with the lines halfway down the poem, "[...] as I answer the questions / 3, 4, 5, times, my jaw tight as a vice,"  So in this narrative poem, the speaker appears to be pulled over and is being questioned.  The approach the poem takes is from the core of a person outward -- inside the feeling of a person, literally and figuratively, to something more.

The speaker mentions this rage that grows and spend a good eight lines using exact body part language on how this rage travels:

hot as an army of red ants and forces
the mind to quiet the body, the quakes
emerge, sometimes just the knees,
but, at worst, through the hips, chest, neck
until, like a virus, slipping inside the lungs
and pulse every ounce of strength tapped
to squeeze words from my taut lips,


For me, the lines speed by just like how quickly an emotion erupts.  I think it is two things: 1) as a reader when that line about "the body, the quakes" sets in we're expecting a bumpy ride so when the list of body parts come out in rapid succession, we too are like the rage, the virus, and 2) the use of commas, even though should technically slow down a sentence, comes off as a list so "hips, chest, neck" -- there's a build up through the language and image.

But this build up transfers to the other, "his eyes scanning my car's insides, my eyes, / my license [...]".  The poem definitely slows down here.  There's a certain invasion of privacy with his (the cop) eyes scanning my eyes and insides of his car.  There's this weird intimate language that continues.

On one hand, fetish.  On the other hand, kind of creepy and rapey vibe through the language.

In any case, the end of the poem refers back to the shivers

and inside beg this to end
before the shiver catches my
hands, and he sees,
and something happens.

I don't think that matters in this poem.  Probably does though.

What matters is what the shivers mean -- this rage that the speaker has to hide.  But don't we all have to hide that rage?  Or rather how and when to show outrage?  I take the ambiguous ending of "something happens" as ironic.  Everything is happening in the speakers head.  The speaker is triggered.  But what action can the speaker really do, nothing (or  try to do nothing).  The "something happens happens" then the poem ends.
Posted by Retailmfa at 12:00 PM No comments:

Analysis of "Again and Again" by Rainer Maria Rilke 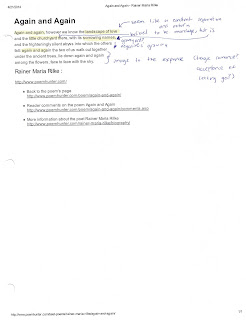 "Again and again," the poem and the first phrase signals a repetition, but funnily enough there isn't a rhyme scheme in the poem -- maybe that'd be hitting things too hard on the nose since, as a reader, we already know the direction the poem is going, the how is what should be the draw.

After reading this poem a couple times, the idea of a graveyard is love, isn't it?  It's a place where loved ones can rest and loved ones can mourn.  Even when the speaker expands upon this landscape of love and depth to the point of hyperbole, "and the frighteningly silent abyss into which the others fall", there is a sense of an Orphean descent that doesn't seem frightening (even though the adverb in the line states that).  The tone I get from the descent is tired.

[...] again and again the two of us walk out together
under the ancient trees, lie down again and again
among the flowers, face to face with the sky.

Isn't there comfort in something being done again and again, even if it is a negative thing.  Let's say the negative thing not stated here is that going back to a graveyard brings back memories like "the two of us walk out together", isn't there comfort that this happens, "again and again."  It's something that can be counted upon.   I think the image of the flowers in the lines outweigh the image of face to face with the sky.   The flowers lessens the "frightening" aspect of this repetition.  Yes, the image could be red ironically, but I'm choosing not to in this instance.  What's my evidence, the silence.

The last three lines are imagistic and focuses with the speaker and the other doing the same action.  If there was a word or two in there that made the poem lean towards that direction, something that has a sense of commentary to the situation, then I can believe that this poem had a hidden irony in it.

But not for me,  when they face the sky, they enjoy this moment with a sense of melancholy and fear, but never wanting to break this cycle.