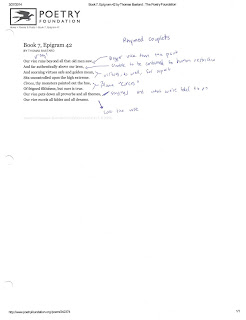 "Love the vice" is the last note I wrote for this poem.  When I reread this poem again, I thought to myself that this poet is really putting vice on a godly pedestal, "Our vice runs beyond all the old men saw."  The use of "old men" in the opening line brings a sense of agelessness as well as human into the poem -- something beyond a normal man (or woman).

"And far authentically above our laws, / And scorning virtues safe and golden mean,"  Once again, vice is beyond humans, whatever human constructs try to block it, and doesn't care about "virtues" that humans do. Vice is just omnipotent.

"Sits uncontrolled beyond the high extreme. / Circes, thy monsters painted out the hue,"  The allusion to Circes is an interesting thing in this poem because it appears Circes is the ultimate vice.  I had to read back the Circe lore from Wikipedia to figure out what this means.

I think in all parts of the Circe lore, there's the seven deadly sins: gluttony, and wrath (Odysseus men turned to pig and gorged upon), lust, sloth, and a pinch of greed (Circe of her magic and inviting Odysseus to sleep with her, Odysseus outsmarting the situation and staying on the island for a year), pride and envy, hmmm, wasn't Odysseus on his Odyssey because of his pride and wasn't the Trojan War mostly about envy?

In any case, the build up to vice leads up to this allusion then the last two lines, "Our vice puts down all proverbs and all themes, / Our vice excels all fables and all dreams."  The usage of the pronoun "our" is interesting.  I think the "our" represents the big humanity part, this fits with the theme of the poem, -- that for humans, even trying to make stories about vice doesn't define the vice.

Meaning a person can't fight vice.  Vice will happen.  Learn your vices.  Love your vices.
Posted by Retailmfa at 12:00 PM No comments:

Poem found here:  "Crumbling is not an instant's Act (1010)"
More about the Poet:  Emily Dickinson 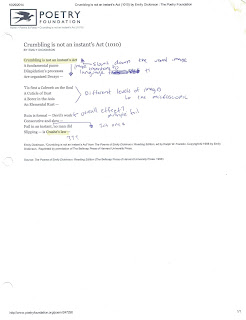 Such a strong first line that makes a reader wonder, "Crumbling is not an instant's Act" where the speaker sets up a curiosity -- what is the physical visual case between crumbling/not crumbling.  The next three lines brings a curt matter of fact attitude:


The process of decay is an orderly manner -- a pause, dilapidation happens, good and organized.  Then the speaker brings this sort of objective view goes back to the self, "'Tis first a Cobweb on the soul."  And as the image of this crumbling soul going down to the most basic electron:

So the soul, this particle, is down to an "elemental" rust is gone.  Is it gone?  If not gone then what happens, "Ruin is formal -- Devil's work / Consecutive and slow --" a continuous decay to something smaller, something minuscule -- a reverse Sisyphean ordeal.

The last two lines don't make sense to me, "Fail in an instant, no man did / Slipping -- is Crashe's law --"  I looked up "Crashe's law",  but this looks like this law refers to nothing I can see outside this poem.  The bigger question to me is "Fail is an instant, no man did."  I understand the enjambment focusing on no man fails in an instant -- but the direct verb drops down to the next line "Slipping" is a good visual, but doesn't make sense with the sentence.

Email ThisBlogThis!Share to TwitterShare to FacebookShare to Pinterest
Labels: Analysis, Crumbling is not an instant's Act (1010)), Emily Dickinson, Poem, Poetry

Poem found here: American Sonnet for My Past and Future Assassin
More about the Poet:  Terrance Hayes 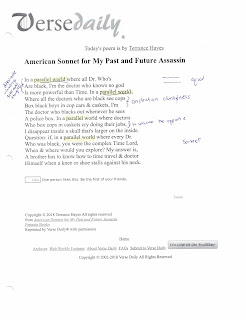 I remember reading parts of this collection at my friend's house.  I haven't read much of him, but knew he was really good.  You don't get a National Book Award for nothing, right.  I've been hitting a rough patch with poetry as life cuts in: full-time job, bills, responsibilities.  It seems I just don't make the time.

And in a weird segway, this poem plays with grandeur things like Time, parallel worlds, and gods.  Also, unfortunately, I don't know anything about Dr. Who.  I should  though, shouldn't I?  Does this matter in the context of the poem when, in an instant, the speaker says, "In a parallel world where all Dr. Who's / Are black [...]" changes the race of the entire history of things but are still recognizable or a "parallel world."

Note, not opposite.  Parallel means just slight changes to the norm -- deviance is more of an opposite reaction.  Time is still powerful in our time, but there's more of an emphasis which changes the culture of this parallel world.

Is it why the following three sentences don't make sense to me?

Where all the doctors who are black see cops
Box black boys in cop cars & caskets, I'm
The doctor who blacks out whenever he sees
A police box [...]


I think it's clever word play with hard stopped sounds as though in an angry flow.  But what does it mean for the doctors to see the cops box black boys in cop cars and casket?  Especially when the next line  have the doctors pass out when to see a police box.  I don't think it matters that I get it, is that I feel the lines -- the flow off anger and harsh words while the actions seem more impotent -- in a parallel world.

Who is the speaker talking to now, the parallel self?

Question: if , in a parallel world where every Dr.
Who was black, you were the complex Time Lord,
When & where would you explore?

Dr. Who and the other being Time lord who is set up to be the most powerful force.  Is, answer, parallel to the self but both powerless in a physical sense when, "a knee or shoe stalls against his neck."  Even in a parallel world the image of the self seems more relevant than the feeling, reaction, outcries.
Posted by Retailmfa at 12:00 PM No comments:

Email ThisBlogThis!Share to TwitterShare to FacebookShare to Pinterest
Labels: American Sonnet for My Past and Future Assassin, Analysis, Poem, Poetry, Terrance Hayes 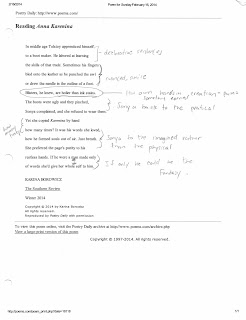 I haven't read Anna Karenina.  Does this make this analysis pretty useless, most likely.  These are my thoughts and analysis of a poem, opinions not fact.

I'm reading two different narratives -- the constructive narrative of the author Tolstoy, and the attempt to help by Karenina.  But something is incomplete in both their process to make a complete failure.

Tolstoy's story -- middle aged man apprenticing himself to be a boot maker and the line that sticks out to me is, "Blisters, he knew, are holier than ink stain."  This metaphor intertwines physical painful but prideful badges of hard work "blisters" versus the overthought, quickened carelessness of "ink stain."  Both symbolizes, to me, the pains of creation and the happiness of the failures of it.  So when "The boots were ugly and they pinched."  I expected a contrast.

But Karenina is not portrayed as a foil to Tolstoy.  "Yet she copied Karenina by hand / how many times?  It was his words he loved,"  The fantasy, the story he created for her.  In real life, it seems he cannot please Karenina, but the fantasy world he makes for her through word, "the page's purity"  is what she wants.

The way the poem pads on that words are the only this Karenina desires, the more that Tolstoy and Karenina come of as imperfect working to be perfect and never achieving it -- a Sisyphean ideal on both desire: physical or fantasy.

"If he were a man made only / of words she'd give her whole self to him."
Posted by Retailmfa at 12:00 PM No comments: