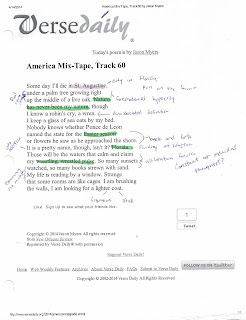 It's been a while, hasn't it?  This poem is definition through tone and assumptions. There is many Florida references in here which the speakers defines with, but how close does the speaker define with the place or the individual?

The first three lines sets the tone to be silly, but a bit grandeur at the same time, "Some day I'll die in St. Augustine, / under a palm tree growing right / up the middle of a live oak."  The three lines add a sense of Christian mythos with the name St. Agustine brought in, but is tempered with the humor of  the realization of place and this weird image of a palm tree growing through an oak like a reverse birth.  It's odd and holy, but, "Nature / has never been my nature."  Note how the upper cased "Nature" is over encompassing while the lower case, "nature," goes back to the personal because of the "my" ownership.

"It is a pretty name, though, isn't it? Florida.'  There's this kind of flippant attitude with the humor, "wrestling, wrestled pulse"  That it's weird how the last three lines feels like an abrupt turn of pace.

My life is reading by a window. Strange
that some rooms are like cages.  I am brushing
the walls, I am looking for a lighter coat.


I'm not to make of this self-enclosement that the speaker is in or does to the self.  Yes, this mindset is triggered by this depreciating line of, "So many sunsets / watches"  but how small and how fast did this become, but I think that's the point.

A sudden anxiety of representation, or rather a sense of anxiety of influence.  The title refers to this poem as "America Mix-Tape" -- a collection of songs which can define a certain idea or time (disco, or the "golden years."    This claustrophobic sense of identity based on a compilation of ideas.

I think this is why the walls needs to be brushed with a lighter coat -- the humor has to withstand.
Posted by Retailmfa at 6:00 PM No comments: