Analysis of "Habit" by Hazel Hall 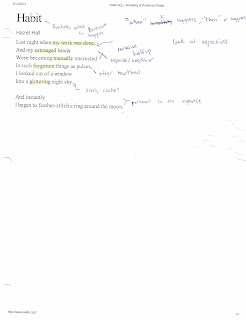 However, this poem made me wonder about the difference between what the mind wants and what the body is willing to do.  The poem is a memory set up in the first line, "Last night when my work was done."  In my notes I wonder what "work" means in this context.  Is the work something different or something the same -- or maybe a little of both.

"And my estranged hands / Were becoming mutually interested / In such forgotten things as pulses"  There's a grim sense in these lines -- a distance in which is defined by the language of "estranged" then turning "mutually interested.  The "pulses" image has a weird positive and negative connotation for me.  The comparison is a simile to "forgotten things", so there's a feeling of a second wind, a pulse that's interesting, but there's also a hidden history here of why are pulses forgotten.  Good reasons?  Bad reasons?

I looked out of a window
Into a glittering night sky.

The inspiration from the sky is cliche, but the feather-stiching a ring around the moon is interested.  Remember this is what the hands and the mind agree to do -- go beyond the expanse into metaphor.  Something intangible or maybe ineffable to agree upon.
Posted by Retailmfa at 5:28 PM No comments: 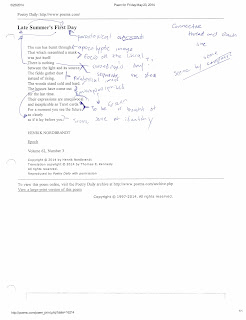 What struck me the most was the title.  How paradoxical the language is of "Late Summer" and "First Day."  What the title does for me is set up a comparative interest that revolves around time -- or rather timing.

The sun has burnt through
That which resembled a mask
was just itself:

The fields gather dust
instead of rising
The woods stand cold and hard
The houses have come out
for the last time.


Dystopian language here.  In haiku, it's renso, the imagination chain where one image expands or pans out to others.  First it is the dust in the field, which moves to the woods, then the houses.  Note with each image the description seems more contrary to the image of summer -- dusted fields seems more like a spring image, woods that stand cold and hard seem more like a winter image, the houses, although with no correlation with a particular season, has no connection.  This lack of connection also questions what first day means when everything appears to be the last day based on the images.

Their expressions are unequivocal
and inexplicable as Tarot cards.
For a moment you see the future
as clearly
as if it lay before you

From specific images to pronouns.  Who are "they?"  What does the "you" refer to?  I feel the "their" refers to more of an overarching humanity they based on the dystopian.  "Unequivical," leaving no doubt; unambiguous, and "inexplicable," unable to be explained or accounted for, seem broad descriptions for expressions at first, but, for me, when I think of Tarot cards it's not happy and great time summer, but rather people either going through tragedy or preparing for one.

Is this the future?  Is this because Summer is late?  I read this poem as though someone is experiencing the end of the world, or a changing of the world to the catastrophic -- global warming?  Climate change?

Posted by Retailmfa at 7:42 AM No comments: