Analysis of "The Hinge of Spring" by Kay Ryan

Poem found here: "The Hinge of Spring" by Kay Ryan 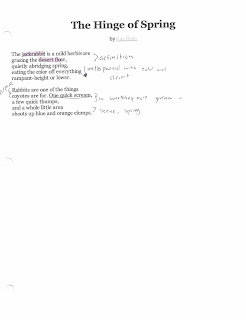 This poem, comprised of two five line stanzas, plays more the idea of definition and redefinition.  For example, the title, "The Hinge of Spring" begs the reader a question "what is the hinge of spring" or rather what is the moment when we know winter has turned to spring.

The first stanza plays with the idea by defining the first moments of spring, "The jackrabbit is a mild herbivore / grazing the desert floor, / quietly abridging spring."  So with these lines the focus is on the jackrabbit as a representative of "the hinge of spring."  The usage of "herbivore" brings more of a foreshadowing scientific presence to a pretty mundane scene which shifts in intensity with, "eating the color off everything / rampant- height or lower."  So we have a mixture of science and metaphor playing here.  The mythos of the jack rabbit is one who "eats the color off everything."  So we have mostly colorless scenery.

The second stanza plays with the descriptive tone, "Rabbits are one of the things / coyotes are for."  The switch of focus to from the rabbit to the relationship of the coyote adds a sense of play between opposing sides, but also the reality of the situation of hunter and hunted, "One quick scream,"  Although this comes off a bit harsh, but this is the sound of the hinge of spring.

Or rather, in this poem, every technique focuses the reader to the definition to images: color, landscape, animals, sound.

"a few quick thumps, / and a whole little area / shoots up blue and orange clumps."  The key to these lines are "area" which encompasses how to take in this poem -- spring as a change in area.  And so with the blue and orange clumps there's an elimination of emotional distress, but the emphasis of the humor of color.
Posted by Retailmfa at 7:15 AM No comments: 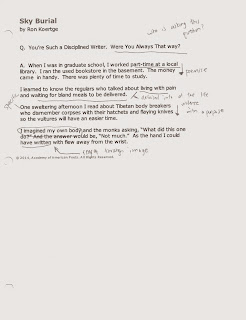 And so the answer:

The first stanza focuses on the time frame and sets up a scene for the exact moment -- that metaphorical answer, "When I was in graduate school, I worked part-time at a local / library."

Then there's the mention of the regulars, "I learned to know the regulars who talked about living with pain / and waiting for bland meals to be delivered."   Yes, there could be something taken away with the specific image of the regulars -- complaints of pain and bland meals as though the regulars are part of the scene, just some backdrop to go along with a basement.

But then the poem switches to something learned:

"One sweltering afternoon I read about Tibetan body breakers
who dismember corpses with their hatchets and flaying knives
so the vultures will have an easier time."

Note how the body breakers relate back to the pain to the body of the regulars.  And also note the "bland meal" is grisly parallel to the bodies of corpses.  Easier time.

Then the relation to the image to the metaphor:

"I imagined my own body and the monks asking, 'What did this one
do?' And the answer would be, 'Not much.'  As the hand I could
have written with flew away from the wrist."

Past me wrote "regret through image" and it's pretty apparent at the end.  But note that the regret is first characterized through the perception of the imagined the monk answering a question within a question, "Not much."  And then the regret is then actualized through a metaphor -- not a direct answer an implied one.
Posted by Retailmfa at 7:01 AM No comments:

Analysis of "For a Poet" by Countee Cullen

Poem Found Here: "For a Poet" by Countee Cullen 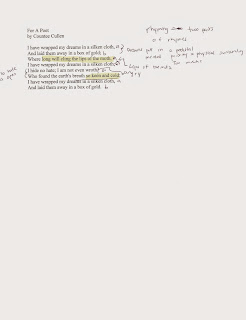 This poem has so many repeating lines.  The first two lines and the last lines repeat: "I have wrapped my dreams in a silken cloth, / And laid them away in a box of gold;"  Furthermore the repetition of the same rhyme of -th and -ld words hit hard and are jarring.

For a poet, there's cynicism.

This poem is not the passing of the torch -- those types of gift poems where the speaker writes it like a commencement speech.  Yes, the speaker's dreams are in silk and in a box, but note the separation of the dream into a beautiful containment -- the flow of -th.

Where long will cling the lips of the moth
I have wrapped my dreams in a silken cloth,
I hide no hate; I am not even wroth
Who found the earth's breath so keen and cold,

The following two lines has a nature image of the "lips of the moth,"  but the moth doesn't serve as a beautiful metaphor to coincide with the silken cloth -- rather antagonistically.  Even thought the moth's cocoon is silk, the moth itself is the unpretty byproduct.  "Long" in that line isn't a determinate of time, rather the emotion of want.  It seems (although a bit of a stretch) the moth is burying itself in such beauty.

So much is buried that "I hide no hate;  I am not even wroth / Who found the earth's breath so keen and cold."  Even though the "hate" is not hidden what is hated is hidden; furthermore, anger is hidden against the physical breath that's keen and cold.

So when the lines repeat, "I have wrapped my dreams in a silken cloth. / And laid them away in a box of gold."  The dreams are protected from the outside reality and metaphors.  They are kept internal, but beautiful.
Posted by Retailmfa at 7:00 AM No comments:

Analysis of "???" by John Surowiecki 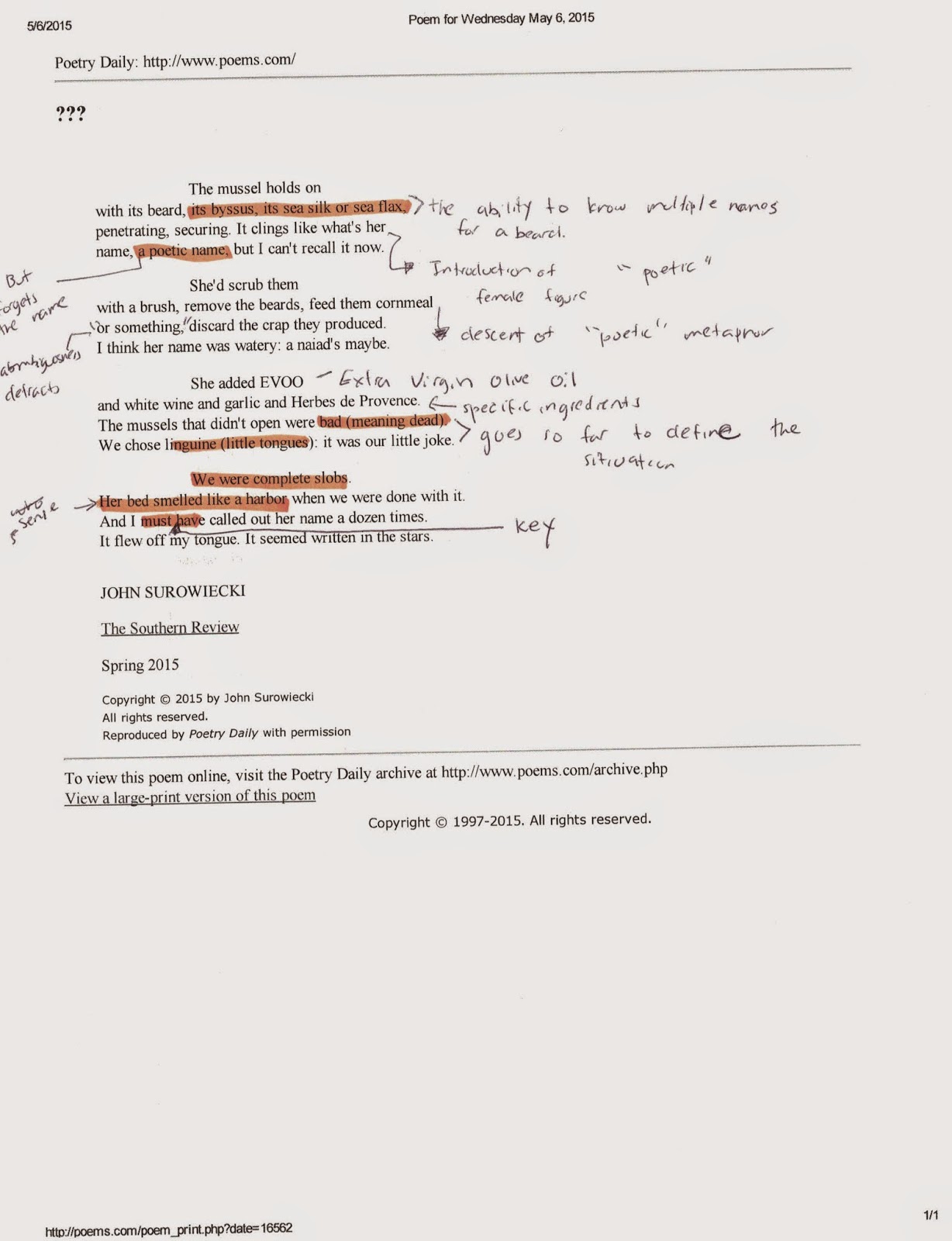 The title gives away the base conceit of the poem:  ??? or something is missing.  It's not a mystery in the first stanza, the question more is "why are such things forgotten."  The poem starts out with the multiple ways of saying mussel bear ranging from the scientific to the nick name, "its byssus, its sea silk or sea flax," and then what the actual things do in multiple ways, "penetrating, securing."

But the key idea is in the line after that, "It clings like what's her / name, a poetic name, but I can't recall it now."  Regardless of what's going on in the poem, the forgetting of a name -- specifically calling out the forgetting of the name, comes to the forefront to me.  Especially since the poem is titled "???."  Why?  if this poem was called something like "Mussels at the beach" then all sense of urgency is gone with thte poem.  The reader wouldn't be looking for what is named, but would look at the situation.  Again, the situations in this poem seem to lose gravity, another meaning, without the conceit.

She'd scrub them
with a brush, remove the beards, feed them cornmeal
or something, discard the crap they produced.
I think her name was watery: a naiad's maybe.

I stated before that the conceit of this poem makes the poem -- the questioning of what's at stake, but there seems to be nothing at stake poetically or personally. "She added EVOO / and white wine and garlic and Herbes de provence,"  Note how specific these lines are, like the beginning of the previous stanzas, and how it goes further, "The mussels that didn't open were bad (meaning dead).  We chose linguine (little tongue) it was our little joke."  So the "little joke" seems to be personal, but isn't attached.

"We were complete slobs" -- in the final stanza the speaker somewhat arrives, "Her bed smelled like a harbor when we were done with it."  and then the memory of sex appears -- but it's not the act but rather the sense.

What's at stake happens in the last two lines, "And I must have called out her name a dozen times. / It flew off my tongue.  It seemed written in the stars."  This poem is not personal in the sense of attachment or emotion, rather personal in how it's composed -- a sense of meta-poetics.  The speaker reconstructs this scene "like a slob" through tonal miscues and breaks in flow, but the name, her name, or rather the lack of knowing her name is the thread in these poems creating an irony with "It seemed written in the stars."  Note that "it" refers to the name.
Posted by Retailmfa at 6:13 AM No comments:

Poem found on the May 5th Edition of "The Writer's Almanac" 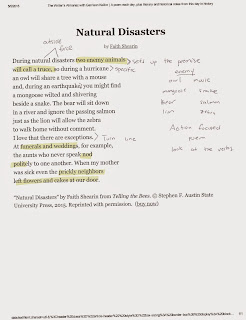 This poem makes creates two comparative metaphors in which the focus changes from premise to action, and within that change two negatives exist.

The premise is first laid out in the first two lines, "During natural disasters two enemy animals / will call a truce."  Theoretically, there doesn't need to be examples except for the first which is simple enough, "so during a hurricane / an owl will share a tree with a mouse."  Here, we have the situation plus the two enemies able to coexist together.

But then the poem expands, not in existence or disparity in enemies, rather the actions the "predator" does.  "during an earthquake, you might find / a mongoose wilted and shivering / beside a snake." and "The bear will sit down / in a river and ignore the passing salmon."

However, the comparison that stands out the most is the last one, "just as the lion will allow the zebra to walk home without comment."  Here the turn has some anthropomorphism.  Here, the lines signal a shift when the "predator" is allowing the "prey" to leave with no comment.

I wrote down that this poem is an action focused poem.  Not in the sense of movement, but the subtle choice of verbs.  "At funerals and weddings," is a big event, but when "the aunts who never speak nod / politely to one another." This little action shows a sense of coexistence -- note not kinship just like how "When my mother /was sick even the prickly neighbors / left flowers and cakes at our door."

It's not the intent, nor is it the grandiose scale of kindness  --- just the action which the speaker states, "I love that there are exceptions."
Posted by Retailmfa at 6:37 AM No comments: