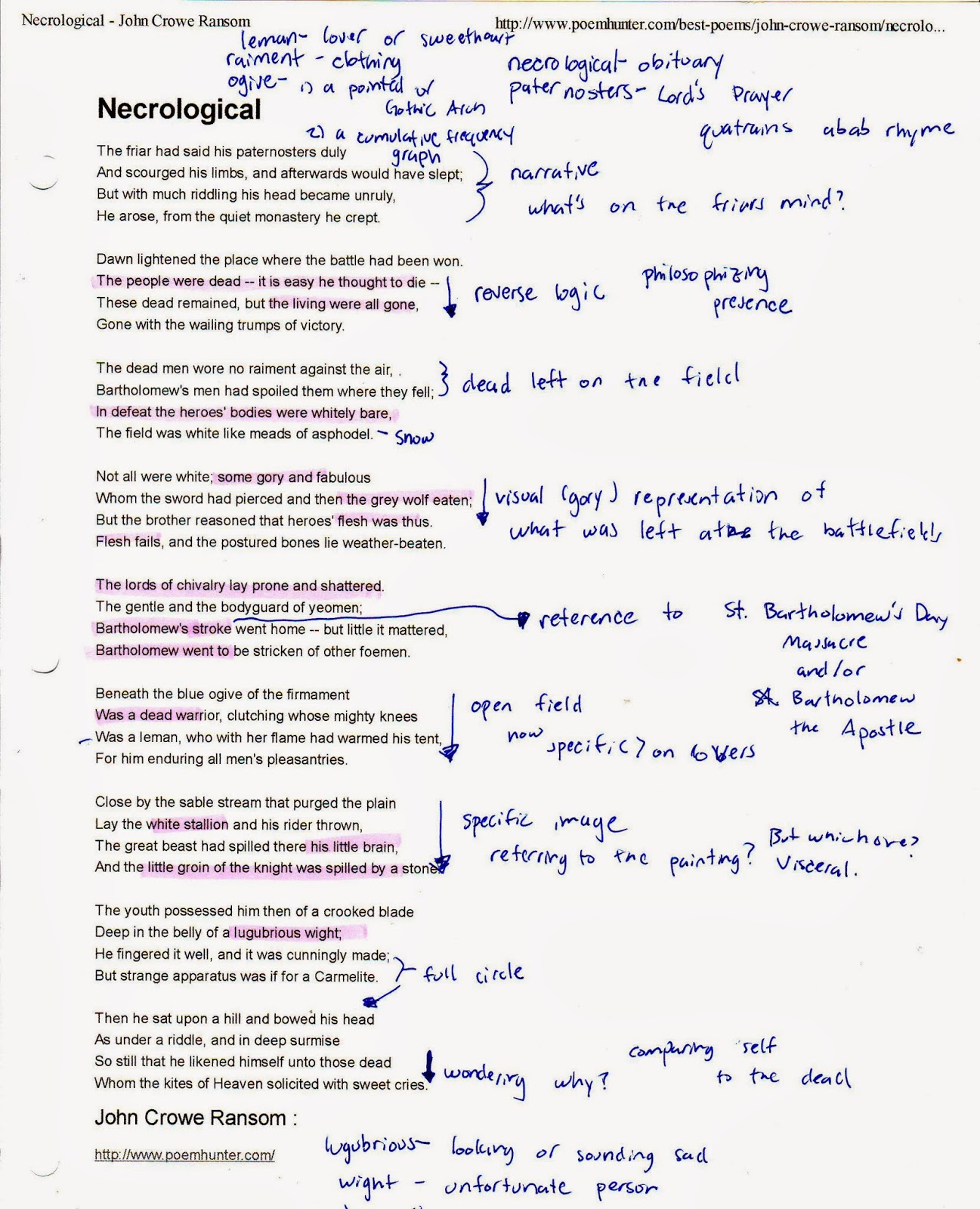 The logic of the dead.  That's if I understand how compound words work.  I probably don't.  Anyway, the poem is written in quatrains with an abab rhyme scheme which would indicate an equivocalness of something.

"The friar had said his pasternosters duly / And scourged his limbs, and afterwords would have slept; " The subject in focus is the friar who goes by a regular routine of prayer and "scourging" himself.  But note the semi-colon here foreshadowing a connection between routine and, "But with much riddling his head became unruly, /He arose, from the quiet monastery he crept."  Yes, there seems to be a logical narrative sequence going on here.  We have a character (friar) we have a setting "monastery" but I contend that the character and scene are the same, well in the end.

The setting continues to be further described, "Dawn lightened the place where the battle had been won. / The people were dead -- it is easy he thought to die --"  The monastery overlooking an old battlefield becomes present again in the mind of the friar.  This allows the friar to imagine, and then interpret the past, "These dead remained, but the living were all gone, / Gone with the wailing trumps of victory."  Note the play with the line break in which there could be an implication of the reinforcement of the dead with the living gone.  But then there's the switch in the next line where the living are "gone with the wailing triumphs of victory."

And then this stanza reveals the historical event:

The dead men wore no rainment against the air,
Bartholomew's men had spoiled them where they fell
In defeat the heroes' bodies where whitely bare,
The field was white like meade of asphodel

So I'm not too sure if this poem is an eckphrastic poem or not.  But the mention of Bartholomew is a reference to the St. Bartholomew's Massacre.

And this is the morning after perhaps, or some time later.  The present of the poem isn't too clear; however, the vivid descriptions are clear.  The reference to "Bartholomew's men" could reference the Catholics that were hunting down the Protestants putting a negative spin on Catholicism, and the heroes could refer to the Protestants, but look at how heroes are depicted "white," and more "white" and even though they are bare, the connotation of "white" or something pure comes through.  "Not all were white, some gory and fabulous / Whom the sword had pierced and then the grey wolf eaten."  And the play on colors continue in which the shift becomes more darker and grimmer.

"But the brother reasoned that herores' flesh was thus / Flesh fails, and the postured bones lie weather-beaten."  The "brother" here refers to the friar, and the friar is "reasoning," what? That flesh fails.  Such a crude statement, but the brother is trying to focus on something more -- the soul, perhaps, the soul, probably.

There's a sense of cynicism with the next stanza focusing on "The lords of chivalry" who won and I think, for me, it's the forced rhyme of "yeomen" and "foemen" that cliches it.  Yes, it's terminology that should be valid for the time frame of St. Bartholomew's Massacre, but not so much during John Crowe Ransom's time.  Here, the language is more pointed "went home" and more direct, "but little it mattered."

Now compare the pointed and direct stanza with this description of a dead warrior, the loser, "Beneath the blue ogive of the firmament /Was a dead warrior, clutching whose mighty knees / Was a leman, who with her flame had warmed his tent."  A slight bit of the proactive here, but the proactive based on the dead states more than the "lords of chivalry."  Past me wrote lovers based on this line, "For him enduring all men's pleasantries."  Not so much lovers, but dealing with "want."  The romance is out of chivalry.

And yes there's more disillusionment going on with, "Lay the white stallion and his rider thrown"  which could be a symbol for the friar unhinging the symbols of chivalry, or in this case, those that represent Catholicism also since this line, "And the little groin of the knight was spilled by a stone" is probably not the way someone wants to go.

Then there's mention of "a crooked blade / Deep in the belly of a lugubrious wight;" and note the semi-colon -- the unfortunate soul has a a blade through it, the connection is the blade, "But strange apparatus was if for Carmelite" a holy metal to smite others.  Here's the question, does the holy metal purify or destroy those in the way.  Visually destroy.  Spiritually purify.  Right?

The last stanza goes back to the friar after thinking all these images up, but also note how the language that shifts the tone goes towards a cynicism.

Then he sat upon a hill and bowed his head
As under a riddle, and in deep surmise
So still that he likened himself unto those dead
Whom the kites of Heaven solicited with sweet cries.

Note that the friar compares with the dead that "Heaven solicited with sweet cries" those that died under the blade.  But there's no connection with the friar and the people who done the deed.  Are the people who slaughter in the name of religion not solicited with sweet cries of Heaven.  I don't know.  But there's going to be crying of some sort involved.
Posted by Retailmfa at 11:09 AM